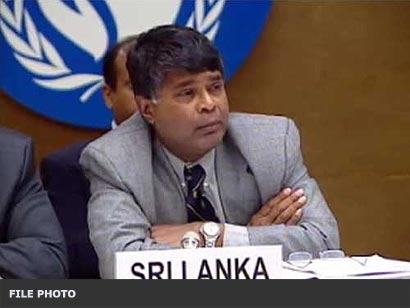 One of the more frequent critiques of the government with regard to what is characterized as Human Rights relates to the 17th Amendment to the Constitution. It is claimed that the failure to fully implement that Amendment makes clear the authoritarian inclinations of the current government.

Not entirely surprisingly, this criticism has figured large in the attacks on the government made by the current opposition. Thus it seems to feature as one of the principal concerns of the European Union, which had been sedulously advised by the opposition with regard to human rights problems in Sri Lanka.

What the opposition failed to mention was that, while in power themselves, it never occurred to them to criticize a system which bestowed unbridled power on the Presidency. When President Jayewardene appointed first his personal lawyer to be Chief Justice, and then passed over the most senior judge on the Supreme Court because he refused to hand over an open letter of resignation, that was seen as a necessary characteristic of strong leadership.

With the advent of President Kumaratunga however the UNP changed its tune, and they saw the virtues of a principle that should have been put forward long before, namely that there should be limitations on the discretion of any appointing authority when it comes to important constitutional positions. Unfortunately the activation of this principle was with the assistance of the JVP which, in common with other left wing movements in Sri Lanka, has a sentimental affection for the Westminster system.

So, in 2001, as part of what was termed the probationary government of President Kumaratunga a couple of years into her second term, the 17th Amendment was introduced. It mixes features of two constitutional dispensations, that of the Executive Presidency and that of the Westminster model.

On the latter system, the Head of State who appoints to significant offices is a titular figure. He acts on the advice of the real executive authority, a Prime Minister. Whilst the discretion of the Prime Minister is in theory unlimited, ie he can recommend anyone for appointment by a titular Monarch or President, in practice he is restrained by the possibility that the appointing authority might question the recommendation.

Contrariwise, in an Executive Presidential system, the Executive President appoints, but his discretion is limited by the necessity of obtaining the consent of an appropriate body. The most obvious example of this is the American Senate, which must ratify Presidential appointments, whether to Cabinet or to the Supreme Court. Even when the President can in effect command a majority in the Senate, he will exercise his discretion carefully, since it would be embarrassing to have untoward questioning during the confirmation proceedings.

What is extraordinary in Sri Lanka is the provision that an elected Executive President should act as the rubber stamp of another body (in some cases, though in others he appoints, with the Constitutional Council having to ratify). In fact the rubber stamp role was challenged several years ago by President Kumaratunga, who ignored the recommendation of the Constitutional Council regarding an Elections Commission. I cannot recall now whether any attempt was made to compel her to act on the recommendation, but certainly no compulsion was in effect brought to bear, which is why Dayananda Dissanaike continues in his current office.

Another anomaly is the great distance at which the Constitutional Council, which is supposed to dictate decisions to the elected President, derives its authority. The manner in which it is constituted is another wonderful example of unsystematic legislation. The Council consists of ten members of whom three are ex officio, namely the Speaker, the Prime Minister and the Leader of the Opposition. These last two recommend five others for nomination by the President.

In making these recommendations, the two major figures in Parliament must consult leaders of political parties and independent groups in Parliament, and three of the five should be nominated to represent ‘minority interests’, after consultation of Members of Parliament (not leaders of parties in this case) belonging to ‘the respective minority communities’.

Of the remaining two members of the Constitutional Council, one is nominated by the President, which is fairly simple. The other is nominated for appointment by the President ‘upon agreement by the majority of the Members of Parliament belonging to political parties or independent groups other than the respective political parties or independent groups to which the Prime Minister and the Leader of the Opposition belongs (sic)’.

Nothing is said about what should happen if there is no agreement with regard to this last – which is what held up appointments to the Constitutional Council last time round – or if the Prime Minister and the Leader of the Opposition fail to agree, or if other parties claim they were not properly consulted. There is no clarity about what is meant by ‘minority communities’ nor which ones are to be privileged through this amendment.

In short, the 17th Amendment was hastily cobbled together by legislators who simply did not bother about consistency or precedents elsewhere. It is singularly inappropriate for the Executive Presidential system we have, and as was shown by President Kumaratunga, nothing can be done if the President is not inclined to accept the recommendations of the Council.

However, both because unworkable and impractical legislation must be changed, and also because it does make political sense to fetter the discretion of any individual to make important appointments (whilst ensuring the primary role of an elected Executive as compared to other individuals or bodies without commensurate authority from the people), it would make sense following the General Election to review the 17th Amendment as soon as possible and introduce some sanity.

Fortunately the oft expressed wish of the President to institute a Second Chamber suggests a simple route to follow. As in the case of the American Senate, such a Chamber could be entrusted with ratification of appointments which the President would make. Some would be ratified through a simple majority, others could require two thirds.

There may be other methods of achieving the desired results, but what is clear is that the 17th Amendment itself should be changed. Given the controversy it has caused, clearing the matter up should be done as soon as possible, but it is important to ensure adherence to established constitutional principles and practices, and not engage in the ad hoc responses which so many amendments to the current Constitution have exemplified.