THOSE INVOLVED IN THUGGERY CAN BRING NO GLORY, SAYS SARATH FONSEKA 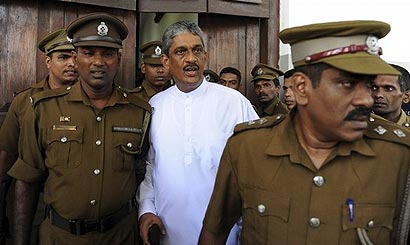 The deliberations scheduled to be held by a panel of five Supreme Court judges on whether or not the court martial is a court established through the Constitution, which was scheduled for yesterday, has been postponed for the 9th of this month.

However, the proceedings were postponed since Chief Justice Ashoka N. De Silva had to participate in other official work.

The issue of whether or not a court martial is a court established through the Constitution arose when a petition filed by Sarath Fonseka was being heard before the Court of Appeal.

Sarath Fonseka had filed the petition against the verdict of the Court Martial.

Meanwhile, the former Army Commander Sarath Fonseka said that those involved in thuggery could not bring glory to the country.

“We condemn the assault on MP Jayalath Jayawardena. It is disgusting. Ministers involved in thuggery cannot bring glory to the country,” said Sarath Fonseka.

Mrs. Anoma Fonseka, who was present for today’s proceedings, shared these views:

“Equipment have been provided for the General to exercise. Therefore the situation is better that what it was before. We requested for that.

“Although a court order was issued for the equipment to be provided, it was not given. Exercise facilities were granted only after an order was given for the third time by court,” said Mrs. Fonseka.

Home » THOSE INVOLVED IN THUGGERY CAN BRING NO GLORY, SAYS SARATH FONSEKA