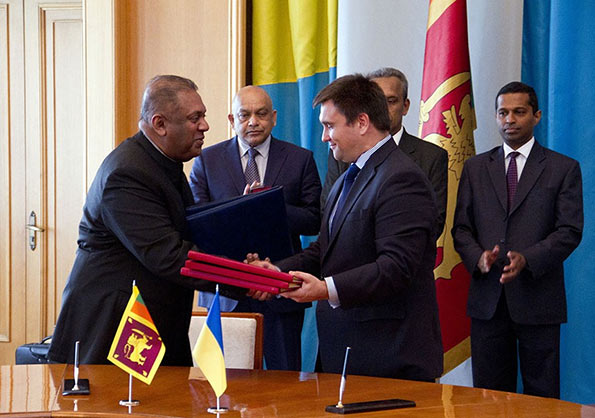 The Ministers held discussions on a series of issues of bilateral importance. Minister Samaraweera reiterated that Sri Lanka is committed to further strengthen and renew the long standing relationship with Ukraine.  He also recalled the invaluable support extended to Sri Lanka by Ukraine during the conflict years.

Minister Samaraweera briefed his Ukrainian counterpart on recent developments in Sri Lanka including measures taken by the Unity Government to achieve reconciliation and inclusive economic development, strengthen democracy, rule of law, and good governance including combating corruption. He also briefed the Foreign Minister of Ukraine regarding the process for evolving a new Constitution.

Welcoming Minister Samaraweera, Minister Klimkin said that the visit would contribute to the reinvigoration of relations between the two countries. Reiterating Ukraine’s support for Sri Lanka in its efforts in reconciliation and peace building, he said Ukraine and Sri Lanka were similar in their drive in promoting democracy and ending corruption.

Minister Samaraweera extended an invitation to Minister Klimkin to visit Sri Lanka at a mutually convenient time which was accepted by Minister Klimkin. This would be the first visit of a Foreign Minister of Ukraine to Sri Lanka.

The two Ministers agreed that there is scope for further expansion of bilateral trade. Noting that tea remains the main export item from Sri Lanka to Ukraine with Ceylon tea occupying 33% of the Ukraine tea market, Minister Samaraweera stressed the need for achieving export diversification.  In this regard, he encouraged business delegations from Ukraine to attend trade exhibitions and business forums held in Sri Lanka to establish contacts with Sri Lankan entrepreneurs.  The need to strengthen cooperation between the Chambers of Commerce of the two countries to facilitate closer interaction between the private sectors of the two countries for the promotion of business and investment was also emphasized.

Noting that 23,853 tourists from Ukraine have visited Sri Lanka in 2015, Minister Samaraweera expressed hope that the commencement of direct non-stop scheduled flights between Kiev and Colombo by Ukraine International Airlines from November 2016 would pave the way for increasing tourist traffic from Ukraine to Sri Lanka. He encouraged travel and tour operators from Ukraine to visit Sri Lanka.

Noting that the two countries are in the process of negotiating a number of other bilateral agreements including Agreements on Investment Promotion and Protection; on the Establishment of an Inter-Governmental Joint Commission on Trade and Economic Cooperation; on Exemption of Visas for Holders of Diplomatic and Official Passports; and on Cultural Cooperation; the two Ministers agreed to accelerate consultations, enabling the early signing of these Agreements.

1 Response to Three treaties signed between Sri Lanka and Ukraine