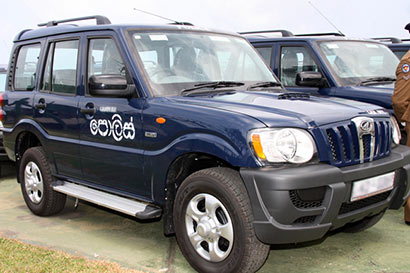 Three persons from the same family died after a three-wheeler collided with the official vehicle of the Superintendent of Police (SP) in charge of Puttalam Division last night.

The accident had taken place in Karikattiya, Madurankuliya on the Puttalam-Chilaw main road at around midnight yesterday (14).

The deceased have been identified as Sirimal Madusanka (18), Akila Madushan (21) and Dilan Madusanka (25), members of the same family and residents of Marichchikattuwa in Mangala Eliya, Ada Derana reporter said.

The SP in charge of Puttalam Division was traveling in the vehicle at the time of the accident and had been returning to Puttalam after attending a ceremony at the Mundalama Police Station.

The three youths were traveling in the three-wheeler from Puttalam to Chilaw.

The three-wheeler had suddenly toppled on the road and collided with the oncoming police jeep.

Police said the area had been experiencing showers at the time of the incident and suspect that the slippery road may have caused the accident.

The Puttalam SP’s driver and the vehicle involved in the collision have been taken into custody by Mundalam Police while further investigations are ongoing.