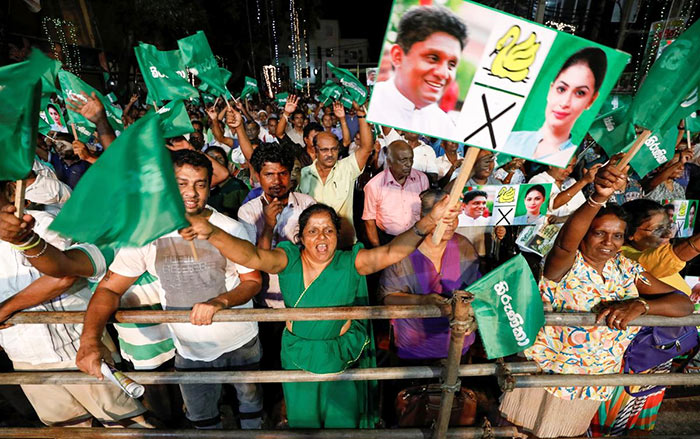 Sri Lanka goes to the polls on Saturday at a time when the economy is growing at its slowest in 18 years, and the tourism industry is still reeling from militant bomb attacks in April.

Former wartime defence secretary Gotabaya Rajapaksa and housing minister Sajith Premadasa are in a tight race for the Nov. 16 election.

Here is a timeline of some key events in the country since its independence in Feb. 1948.

Sept. 25, 1959: Prime Minister Solomon Bandaranaike is shot dead by a Buddhist priest while sitting on his veranda with officials during a public event.

The following July, his widow Sirima Bandaranaike becomes the world’s first female prime minister, when the coalition she is leading wins elections. She goes on to hold the post for three terms.

April 5, 1971: Armed youth launch a campaign to topple Bandaranaike’s government, attacking police stations and government offices. The insurrection is quelled with the help of foreign military forces, including those from India.

1976: Separatist group Liberation Tigers of Tamil Eelam (LTTE) formed, with the aim to form an independent state in the north and east of the island.

1983: An LTTE ambush causes death of 13 soldiers, sparking anti-Tamil riots, in which several hundred Tamils die. This triggers a long period of conflict, marked by political assassinations and suicide bombings.

Dec. 26, 2004: A 9.0 magnitude earthquake in the Indian Ocean triggers a tsunami, which causes the death of thousands.

2015: Last presidential and parliamentary elections. Mahinda Rajapaksa, Gotabaya’s brother who served as president for a decade, is defeated in his bid for a third term. Maithripala Sirisena becomes president instead.

Eventually, Mahinda Rajapaksa backs down from claiming the office and Wickremesinghe is reinstated.

April 21, 2019: Coordinated suicide bomb attacks are carried out on Easter Sunday at three churches and four hotels by an Islamist group, killing over 250 people.