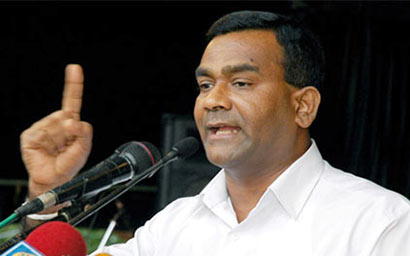 An inquiry had been launched by the CID based on reports that Attanayake displayed an alleged secret agreement letter said to have signed between President Maithripala Sirisena and Prime Minister Ranil Wickramasinghe.

Attanayake who was at the time Health Minister of former President Mahinda Rajapaksa’s government, displayed the agreement letter and alleged President Sirisena and the Prime Minister of signing the secret agreement, in addition to the Memorandum of Understanding (MoU) signed in the public. The Parliamentarian also alleged the secret agreement of containing several terms that could be harmful to the country.

On 25 December, President Sirisena also sent a letter of demand to Attanayake, on this regard, and demanded 2,500 million rupees as compensation.

The letter of demand said “I am instructed that my client (Maithripala Sirisena) and Hon. Ranil Wickramasinghe did not sign any Agreement on 1 November, 2014, or on any other day as alleged by you containing any of the conditions which you alleged contains,”

Wickramasinghe, in a letter sent to the IGP, also expressed concerns and stated that he had never signed such agreement with President Sirisena. The Prime Minister also charged Minister Attanayake of forging his signature and distributing the document at the press conference.