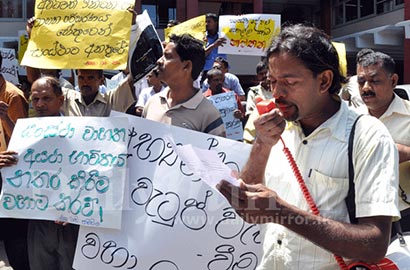 Pro government trade unions protesting opposite the State Engineering Corporation today, charged that Minister Wimal Weerawanshe has over 35 vehicles for his personal use and were filling the corporation with henchmen who are given bogus posts.

The convener of  Joint Trade Unions Thushara Gunarathne said that Minister Wimal Werawanshe is directly responsible corruption in the corporation. “ The Minister has over 35 vehicles for his personal use, he also has given his henchmen bogus posts and they are paid huge salaries without even reporting to work” he charged.

Convener of joint trade unions Thushara Gunarathne alleged that rampant corruption is prevalent at the corporation. “Large scale corruption prevails within the corporation, we have not received any salary increase during the last three years and we will continue to fight for our rights” he said

The Convener said that around 3000 employees of all levels participated in the protest. The Trade Unions vowed to continue their protests until their demands are met.