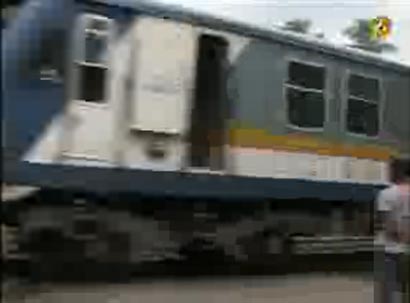 September 27, 2010: The postmortem into the incident where three persons died at the Katunayake level crossing was conducted today. Those killed when the train knocked the motorbike they were travelling on was a nine-month-old child, his mother and a relative.

The motorbike had been travelling from the Averiwatta area in Katunayake towards the Katunayake main road and the train had been plying from Colombo to Chilaw.

“I sent them on the motorbike as it was more convenient. My wife was carrying the baby. Getting closer to the level crossing, I noticed that the train had stopped. Then I saw my wife and my brother’s wife on the ground. I shouted and took them to hospital but when I arrived at the hospital, three of them had died,” said the distraught father.

According to area residents, the signal lights at this level crossing malfunctions frequently. They also said that fatal accidents had occurred at the same location due to malfunctioning signal lights.

“These signals don’t work. At times they come on only after the train has passed. Sometimes, the alarm goes off even when there is no train in sight,” said one resident.

The bodies of the victims were handed over to the relatives this evening.