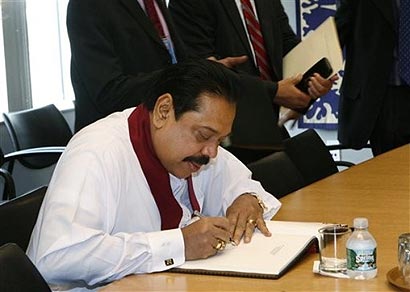 While on his official visit to New York City for the United Nations General Assembly, President Mahinda Rajapaksa met with leading American business leaders at a luncheon to outline emerging opportunities for investment in Sri Lanka.

Business executives from a variety of industries, including the aerospace and defense community, the hospitality and tourism industry, and beverage industry attended the luncheon held at New York City’s Helmsley Hotel. Executives from the Coca Cola Co., the Boeing Co., Google, Hilton Hotels & Resorts and Starwood Hotels & Resorts were among the nearly 100 Business Leaders, Analysts, representatives of Chambers of Commerce and Industry present at the occasion.

Amidst his busy schedule President Rajapaksa mingled with the American Business leaders meeting and greeting each person individually and requesting them to focus new interest in Sri Lanka as an investment opportunity.

Members of the US business community shared the view of a key representative of the pharmaceutical industry giant Pfizer Inc., that “This forum has the potential to grow into a US-Sri Lanka business council to bring together companies and government.” “Companies like Pfizer want to invest in emerging markets like Sri Lanka,” the Pfizer representative said, noting that the business luncheon allowed corporate executives to meet government officials and Sri Lankan business leaders. “It is a great way to start a dialogue,” he said.

The Keynote Speech by Prof. GL Peiris, Minister of External Affairs Sri Lanka, said Sri Lanka boasts an economy with strong fundamentals – a market poised for continued growth and international investment. Noting the nation’s promising economic future, Prof. Peiris said “Sri Lanka is today, without any exaggeration, one of the world’s best destinations for investment…. We are on the threshold of an economic renaissance in Sri Lanka.’’

The Sri Lankan delegation’s visit to the United States comes as the nation enjoys remarkable economic success during a global downturn. Sri Lanka’s per capita income more than doubled during the past five years and the International Monetary Fund recently upgraded Sri Lanka to “middle income emerging market” status.

Ms. Esperanza Gomez Jelalian, executive director of the Asia Department at the U.S. Chamber of Commerce, noted the Chamber’s support for Sri Lanka. “We are firmly committed to a working relationship between our countries,” Ms. Jelalian said

After video presentation that focused on the new opportunities for investment with peace, and a stable government, the participants were apprised that as the second-fastest growing Asian economy after China, Sri Lanka now looks for additional development of the nation’s infrastructure, including its roads, ports, energy sector and water systems.

The booming tourism industry in Sri Lanka is expected to continue growing and the expansion of hotels and related development in Sri Lanka is needed to match growing demand. Those present were reminded that Sri Lankan tourism industry received a huge boost early this year when The New York Times named Sri Lanka the No. 1 one place to travel to in 2010, with similar accolades from the National Geographic and other leading travel publications.

Prof Peiris hailed what he saw as an “Economic Renaissance in Sri Lanka where opportunities abound for Foreign Investors”; he identified wide range of areas in tourism alone, such as Eco-Tourism, Health Tourism with the search for cures closer to nature as found in Ayurveda, and Spiritual Interest, manifest in the Buddhist traditions in the country. He also saw the possibilities that are available for value addition in the agricultural sector, bringing Sri Lankan agricultural products to the threshold of the western markets, and the vast untapped resources in the fisheries sector.

Emphasizing the remarkable success of the Sri Lankan economy after the undoubted defeat of terrorism, Secretary to the President Lalith Weeratunga said a clear example of the buoyant economy was the fact that although it had taken one year since the end of the conflict for the Colombo Stock Exchange, among the best performing bourses in the world, to reach the first trillion rupees in market capitalization, taking just nine months to exceed the second trillion, with foreign investors contributing much to the rise.

The US Business Leaders were also able to interact with the 15 member Sri Lankan Business Delegation that was also present in New York.

1 Response to Top US Business Leaders meet President in NY