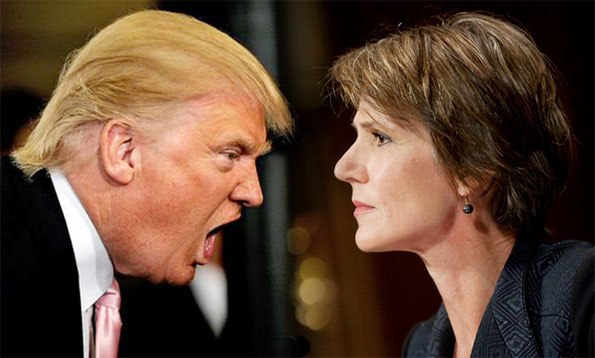 Donald Trump has fired the acting US attorney general after she told justice department lawyers not to defend his executive order banning entry for people from seven Muslim-majority countries.

The White House said on Monday that Sally Yates had “betrayed” the department by refusing to enforce a legal order that was “designed to protect the citizens of the United States”.

Trump drafted in Dana Boente, US attorney for the eastern district of Virginia, to replace Yates as acting attorney general. The president’s official appointee, anti-immigration hardliner Senator Jeff Sessions, is yet to be confirmed by the Senate.

As the country’s top law enforcement official, Yates, who was appointed by Barack Obama, had control over the justice department’s immigration litigation office, which has handled the federal complaints filed against Trump’s order since his bombshell policy was announced on Friday.

“I am responsible for ensuring that the positions we take in court remain consistent with this institution’s solemn obligation to always seek justice and stand for what is right,” Yates wrote in a letter to justice department lawyers. “At present I am not convinced that the defense of the executive order is consistent with these responsibilities nor am I convinced that the executive order is lawful.”

The action earned praise from immigration activists and Democrats but within three hours Yates was gone.

A statement from the White House press secretary’s office said: “Ms Yates is an Obama administration appointee who is weak on borders and very weak on illegal immigration.

“It is time to get serious about protecting our country. Calling for tougher vetting for individuals travelling from seven dangerous places is not extreme. It is reasonable and necessary to protect our country.”

Trump had “relieved Ms Yates of her duties” and Boente would take over until Sessions’s confirmation by the Senate “where he is being wrongly held up by Democrat senators for strictly political reasons”.

The White House statement quoted Boente as saying: “I am honored to serve President Trump in this role until Senator Sessions is confirmed. I will defend and enforce the laws of our country to ensure that our people and our nation are protected.”

Democrats condemned the dismissal. Zac Petkanas, a senior adviser to the Democratic National Committee, said: “Donald Trump can try to silence heroic patriots like Sally Yates who dare to speak truth to power about his illegal anti-Muslim ban that emboldens terrorists around the globe. But he cannot silence the growing voices of an American people now wide awake to his tyrannical presidency.”

Laurence Tribe, a constitutional law professor at Harvard University, told MSNBC’s Rachel Maddow Show: “I think it’s historic. It certainly reminded me immediately of the Saturday night massacre. There are many differences but one is how quickly this has happened in the Trump presidency.

“It’s as if history is being collapsed into a black hole and everything is happening faster than the speed of light.”

Tribe argued that “the executive order really challenges who we are as Americans and violates important parts of the constitution” and noted there had been protests from the ground up.

“I think it’s an important turning point in our history and tonight is part of that extraordinary moment we are living through.”

Yates, a career justice department attorney, was the deputy attorney general in the Obama administration. The Trump team had asked her to stay on to allow for a cohesive transition, even as the other senior leadership of the justice department departed.

Jeff Sessions had been supposed to receive a Senate vote on his attorney general nomination on Tuesday. But Yates’s contradiction of Trump’s order, however short-lived it proved, lent the imprimatur of the justice department against one of the president’s signature initiatives.

“She was fired for recognising that her oath is to the Constitution and not to President Trump. His accusation that she has ‘betrayed the Department of Justice’ is wrong and it is dangerous.

“President Trump has now put his cabinet on notice: if you adhere to your oath of office to defend the Constitution, you risk your job. Equally troubling is that his nominee for attorney general, Senator Jeff Sessions, has shown no indication that he has the independence to put the Constitution before the president. The Senate at its best can be the conscience of the nation. Senators must oppose Senator Sessions.”

Lee Gelernt, of the American Civil Liberties Union’s immigrants rights project, said of Yates’s stand: “This is a remarkable but welcome development and sends a powerful message that there’s something very wrong with a Muslim ban.”

Evan McMullin, a former CIA operative and independent candidate in the 2016 presidential election, tweeted: “I salute the courage of @SallyQYates. May other Americans in the government have the same resolve when required.”

Yates, 56, from Atlanta, Georgia, was the lead prosecutor in the case against Olympic bomber Eric Rudolph.

She received bipartisan praise when she was appointed to the number two spot below Loretta Lynch at the justice department in 2015. The Republican Senator Johnny Isakson of Georgia said of her: “Sally Quillian Yates is a human being I have known for almost 40 years. For 25 years she has been the lead prosecutor in the northern district of Georgia. She has been an equal opportunity prosecutor. She’s prosecuted Democrats, Republicans, independents, Olympic park bombers, anybody that violated the public trust, any abuse of power.”

His fellow Republican, David Perdue, said of Yates: “I’m confident that she will bring an objective, apolitical approach to the justice department.”

Georgia’s Republican governor, Nathan Deal, wrote in a letter to the Senate judiciary committee: “Sally has shown an ability to handle sensitive matters in a way that maintains the appropriate objectivity that is required of a federal prosecutor.”

Before he fired Yates, Trump responded first on Twitter, branding her an “Obama AG” in a post that also complained about Democrats holding up his cabinet nominations. “The Democrats are delaying my cabinet picks for purely political reasons,” he wrote. “They have nothing going but to obstruct.”

Senator Ted Cruz, a longtime rival of Trump, came to the president’s defense on Monday night. “President Trump was exactly right to fire an acting attorney general who refused to carry out her constitutional duty to enforce and defend the law.” He added that Yates, in his opinion, “put brazen partisan interests above fidelity to law.”

Yates’s decision was the latest show of dissent from a government agency at odds with Trump’s executive order. Earlier on Monday hundreds of US diplomats were reported to have signed a memo fiercely dissenting from Trump’s travel ban.

The executive order signed on Friday denies refugees, immigrants and travelers from certain Muslim-majority countries entry to the US; indefinitely closes US borders to refugees fleeing the humanitarian crisis in war-torn Syria; imposes a de facto ban on people traveling to the US from parts of the Middle East and Africa; and prioritizes refugee claims “on the basis of religious-based persecution”.

Yates’s decision came as Reuters reported that the US government had granted waivers to allow 872 refugees into the country this week, despite the ban being implemented on Friday evening.

In a sign of the turbulent waters in which Trump is swimming, it was unclear whether Boente, the new acting attorney general, could sign national security surveillance requests under the seminal Foreign Intelligence Surveillance Act (Fisa), when he was not specifically confirmed in his role by the Senate.

Mike German, an FBI counterterrorism agent and surveillance law expert, said the Boente appointment had created an “unprecedented” situation but thought the Fisa court was unlikely to stand in the way of a surveillance request.

“The Fisa court doesn’t have a long history of finding reasons to reject [requests], and if it were to err here, it’d be on the side of authorizing the new acting attorney general to sign the warrants,” German said.

The White House indicated to pool reporters it believed Boente had the requisite surveillance authority.