Twenty-four including 5 Lankans nabbed by villagers in Malaysia 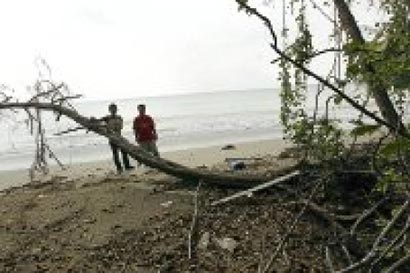 More than 20 villagers in Pengerang, Malaysia, including six Rela members nabbed 24 foreigners including five Sri Lankans whom they believe  entered the country illegally. The foreigners were handed over to the police, recently.

The operation was initiated by the villagers and  Rela members in Kampung Punggai, Pengerang,  last week. They spotted the foreigners at 10pm on Tuesday and gave a chase.

The drama unfolded when a villager spotted passengers getting out of a van and two cars at a village mosque which has not been used for more than 10 years.

Over the last few years, a syndicate had been leaving foreigners at the mosque. The foreigners then walk about 10 metres to Pantai Punggai where a boat will pick them up.

In the operation, which ended at 1am the next day, the villagers held 14 Afghans, three Pakistanis, and five Sri Lankans.

Muhamed Abu Samah, 54, a Rela member, said his sons Muhamed Faisal, 29, and Muhamed Farid, 18, later spotted another Sri Lankan, on a tree near the mosque at 9.45am on Wednesday.

Villager Azman Madon, 39, a security guard at SK Punggai, said another Sri Lankan was later found wandering in the vicinity of the school about 7am on the same day. The school is about 50m from where the foreigners were dropped off the night before.

“When the Sri Lankan came down from the tree, he was trembling with fear,” Abu said.

“The Sri Lankan said he was promised a job in Australia.”

Abu added he was angry that the middlemen were dumping the foreigners in his village.

However, he sympathised with the foreigners who were duped into believing that the village was a temporary stop to greener pastures in another country.

According to Abu, the villagers took action because they did not want the reputation of their village to be smeared by outsiders.

Another Rela member, Wahid Yet, 52, said: “So many lives have been lost. Eight foreigners were drowned in February when a boat capsized off Teluk Semayang waters in Sedili Besar, near Kota Tinggi. We don’t want a repeat of that tragedy.”

When contacted, Kota Tinggi district police chief Superintendent Mahazan Che Aik said the case is being investigated under section 26A of the Anti-Trafficking in Persons and Anti-Smuggling of Migrants Act 2007.

He said: “Even those who have documents are being detained to check whether their passports are valid.”

Mahazan said the middlemen, if found guilty, could be jailed for 15 years or fined, or both, Strait Times reports.

Home » Twenty-four including 5 Lankans nabbed by villagers in Malaysia