Two UN peacekeepers killed by mine in central Mali: sources 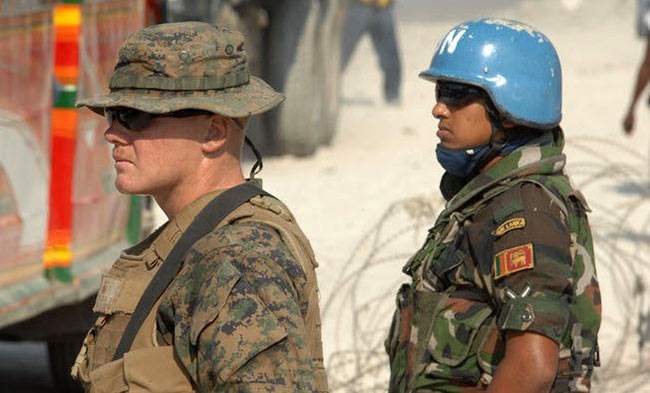 Two UN peacekeepers from Sri Lanka died and several were wounded on Friday in central Mali when their vehicle hit a mine, UN mission in Mali (MINUSMA) sources announced.

“This morning at around 0600, a vehicle in a MINUSMA logistics convoy hit a mine near Douentza, Mopti region,” a UN statement said. It added that some of the wounded were badly injured.

The men who died were Sri Lankan members of the 14,000-strong UN military and police mission, the source told AFP on condition of anonymity, adding that the injured had been evacuated.

The UN force deployed in Mali since 2013 to help counter jihadist activity “sent reinforcements to the scene not far from Douentza to secure it” after the attack, the source said.

The casualties come after jihadist gunmen killed 10 Chadian peacekeepers and injured at least 25 others in an attack on a UN camp in Aguelhok, northern Mali on Sunday.

Al-Qaeda in the Islamic Maghreb (AQIM) claimed responsibility for Sunday’s attack — one of the deadliest strikes against the UN mission in the West African country.

Mali, one of the poorest countries in the world, has struggled to return to stability since extremists linked to Al-Qaeda took control of the north in 2012, prompting France to intervene militarily.

The jihadists were routed from key desert towns such as Timbuktu and Gao, but large stretches of the landlocked Sahel state remain out of government control.

A peace deal between the government and armed groups was signed in 2015, but implementation has been slow and attacks have continued in the centre and north.

“The number of attacks of this type has increased steadily since January 2018, reaching 192, while there had been only 124 during the same period in 2017,” according to the report.