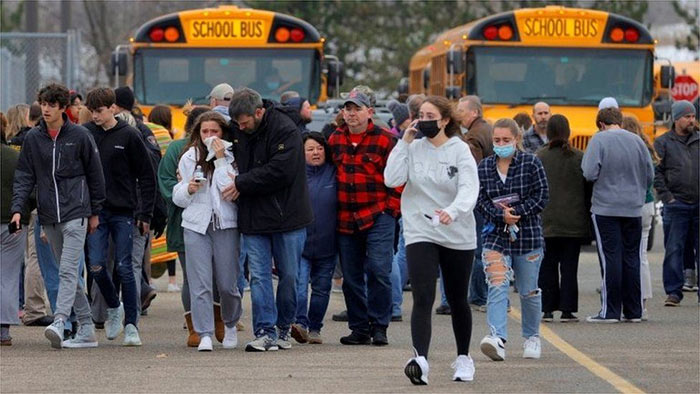 Three students have been killed and eight others injured, including a teacher, in a high school shooting in the US state of Michigan.

Police say the 15-year-old suspect fired 15 to 20 shots with a semi-automatic handgun and acted alone.

The assailant’s motives for the attack in the town of Oxford, about 40 miles (65km) from Detroit, remain unclear.

Within minutes, officials had received 100 calls to 911, he said.

A police officer stationed at the school helped detain the suspect, he said. No shots were fired during the arrest, and the teenager was not injured.

“He gave up without any problems,” said Mr McCabe, who later added that the suspect had been in class before the shooting began.

The school was evacuated, and officials conducted three separate sweeps of the campus to ensure that there were no additional victims.

Two of the injured were undergoing surgery, while the other six were in a stable condition with gunshot wounds.

In the news conference, officials said the suspect had so far refused to speak and was “not co-operating”.

Mr McCabe said that the suspect had been told by his parents not to talk to police and that a search was being conducted of the pupil’s home.

He added that the suspect was not wearing body armour during the shooting, and that officials know how the gun was brought into the school, but are not yet able to reveal that detail.

“Of course I’m shocked. I’m devastated,” said Oxford Superintendent of Schools Tim Throne. All schools will be closed for the rest of the week and crisis support is being offered to students and parents.

According to the Detroit Free Press newspaper, rumours had been circulating of a possible attack, and some students had decided not to attend classes on Tuesday.

Parent Jody Job told the paper that her son had skipped school because “he felt like something was going to go down”.

Robin Redding told the Associated Press that her son had also missed classes due to concerns about safety.

“He was not in school today,” she said. “He just said that ‘Ma I don’t feel comfortable. None of the kids that we go to school with are going today.'”

President Joe Biden spoke about the shooting during a visit to Minneapolis, Minnesota.

“My heart goes out to the families enduring the unimaginable grief of losing a loved one,” he said.

US shootings on school grounds have been ticking steadily upwards in recent years, according to pro-gun control group Everytown.

After a brief dip last year during coronavirus lockdowns, the number of such attacks has rebounded with 138 incidents of gunfire on school grounds so far in 2021.