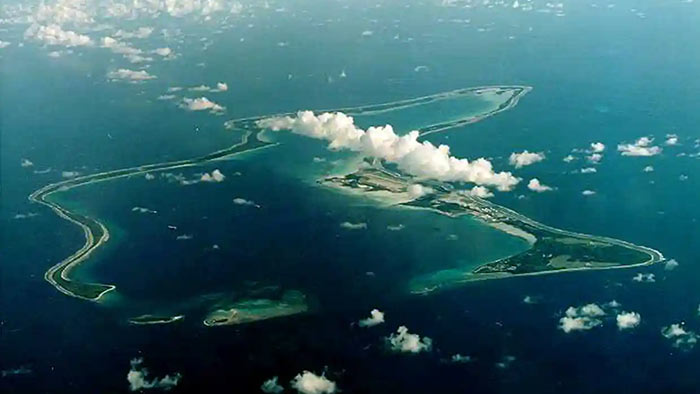 Diego Garcia, the largest of the Chagos Islands, which the UK calls the British Indian Ocean Territory (BIOT). Photo by Reuters.

Lawyers have reportedly accused the United Kingdom of helping Tamil refugees in their onward dangerous boat journey who had reached the British-claimed region of Diego Garcia.

The lawyers have claimed that fishing boats that left Sri Lanka were escorted to the Indian Ocean island after running into trouble, The Guardian reported. However, the same vessels were allowed to travel without the safety equipment which placed passengers, including children at “grave risk.”

In legal letters presented to the government, the lawyers revealed that one boat with 46 people reached the French territory of Reunion after three weeks at sea. Another boat carrying 35 people, including an 18-month-child, was taken back to Diego Garcia due to a failed engine. Notably, Diego Garcia is part of the Chagos Islands and is called British Indian Ocean Territory (BIOT) by the UK continues to claim sovereignty.

The UK law firm Leigh Day, which is representing 81 refugees, has claimed that they wanted to leave, however, they alleged that the UK might have violated international law and the UK children act if they permitted them to leave without checking if the boats are safe and seaworthy for the journey of people.
Lawyers say govt claim about boat heading to Sri Lanka ‘lacks credibility’

The lawyers have underscored that the government’s claim that the boat was heading to Sri Lanka instead of Reunion “lacks credibility” as the passengers were previously given a chance to travel back by air with the assistance of £1,500 (Rs 1,39,266.20). According to the lawyers, the boat is not equipped with an automatic identification system which allows it to be tracked and its current location remains unknown.

Furthermore, the lawyers have said that the boat does not have a record which shows that it has been registered as having a radio or other lifesaving equipment. The UK law firm Leigh Day has claimed that the boat is believed to have no life raft and has less number of life jackets for all the passengers that are onboard the vessel.

Meanwhile, a government spokesperson has claimed that those who have departed from the island voluntarily. The spokesperson further added that the BIOT administration facilitated the sea trials in order to “ensure that vessels were seaworthy.”

Earlier on October 13, the UK Foreign, Commonwealth and Development Office had claimed that they had helped in the return of 60 migrants by plane to Sri Lanka. It further stated that the UK government remains committed to supporting the departure of the migrants from BIOT.