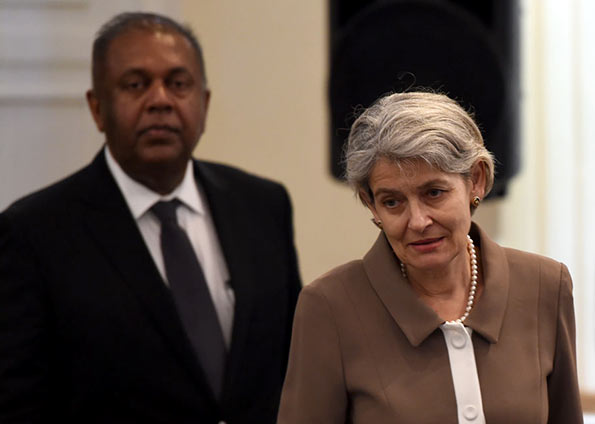 The UN’s cultural agency has denied reports it is considering taking an ancient Sri Lankan cave temple off a list of world heritage sites, as a local conservation official Saturday renewed fears about its status.

On a visit to the island last week, UNESCO Director-General Irina Bokova told reporters she had raised concerns over the maintenance of the Golden Temple of Dambulla with local authorities.

However, Bokova’s office later stressed she did not say the centuries-old monastery risked being removed from the list of World Heritage Sites, but rather that UNESCO is in dialogue with Sri Lankan authorities over the temple’s condition.

“The Office of the Director-General reiterates that the Organization is engaged in a process of dialogue with national authorities on this matter, and that no reference was ever made to its delisting as a World Heritage Site,” the statement released Thursday said.

Sri Lanka’s top official in charge of heritage conservation told AFP Saturday he believed the Dambulla temple was in fact in danger of being removed from the list owing to decades of neglect.

“The temple risks losing the World Heritage status for two reasons. One is the new constructions that have been added and the second is the damage to murals and the failure to conserve them,” Prishanta Gunawardhana, the head of the government’s Central Cultural Fund told AFP.

A resident monk had for more than two decades denied conservation officials full access to the temple but a recent change of chief priest had given authorities hope the decline could be stopped, Gunawardhana said.

“This is a national tragedy. We will take at least five months to assess the damage caused by years of neglect,” Gunawardhana said.