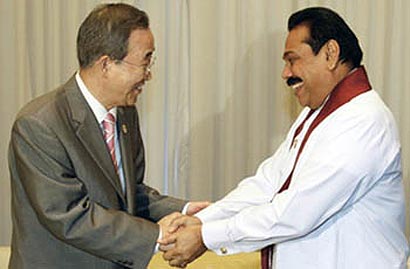 The UN panel of experts advising the Secretary General on alleged violations of international human rights and humanitarian law during the final stages of the conflict in Sri Lanka has called for written submissions.

Those who wish to make submissions may make one written submission not exceeding ten pages. It must include the contact details of witness say the panel.

The panel led by former Indonesian Attorney General Marzuki Darusman will receive submissions until 15 December 2010 and the submissions may be sent to panelofexpertsregistry@un.org

UN says that submissions made to the Panel of Experts will be treated as confidential.

UN Secretary General’s spokesman Farhan Haq told BBC Sinhala service that Secretary General Ban Ki-moon when he met President Mahinda Rajapaksa recently in New York, discussed how to move forward on commitments made in the joint statement of May 2009 .

The joint statement was issued after the secretary general’s visit to Sri Lanka.

“They discussed on accountability, reconciliation, and a political settlement,” said Farhan Haq.