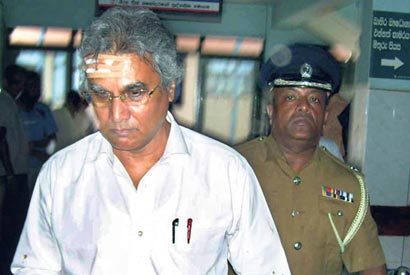 Ruhuna University Vice Chancellor Prof Susirith Mendis was attacked by a group of undergraduates when he went to settle a clash between two student groups of the Humanities Faculty yesterday morning.

The Vice Chancellor who received injuries obtained outdoor treatment from the Matara General Hospital, said a spokesman for the Hospital Police Post.

Senior Student Advisor Saman Chandana who arrived at the scene too had been assaulted by some students.

The Vice Chancellor has made a complaint to the Matara Police regarding the attack.

There has been continuous student arrests in the Ruhuna University within the last few days with students attached to the Inter-University Students Union clashing with members of the Science Faculty Student Union. Seven undergraduates were hospitalised following a clash between two groups Tuesday. Some of the undergraduates attached to the Ruhuna University allege that members of the Inter-University Students Federation were trying to create chaos at the institution and disrupt its smooth functioning.

Higher Education Minister S B Dissanayake said yesterday that disciplinary action will be taken against the undergraduates behind the attack.

He said if found guilty, they will be expelled from the University.