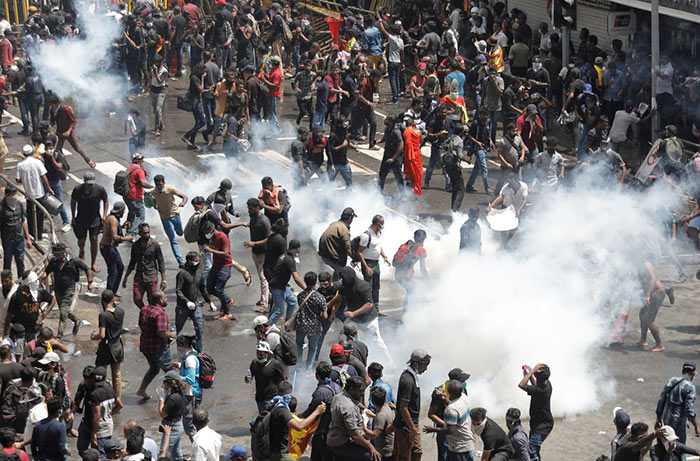 Demonstrators run from tear gas used by police during a protest demanding the resignation of President Gotabaya Rajapaksa, amid the country’s economic crisis, near the president’s residence in Colombo, Sri Lanka, July 9, 2022. (REUTERS / Dinuka Liyanawatte)

Sri Lanka is at a critical juncture and the new Government must make progress on accountability as well as institutional and security sector reforms, the UN human rights office, OHCHR, said in a report published on Tuesday.

The country is in the grip of a serious economic crisis which has had a severe impact on the human rights of all communities.

This has sparked demands for deeper reforms and accountability, giving the authorities a fresh opportunity to steer a new way forward, said the report, which calls for holding a national dialogue to advance human rights and reconciliation.

However, for sustainable improvements to take place, recognizing and addressing underlying factors that have contributed to the crisis will be vital. These include impunity for past and present human rights violations, economic crimes and endemic corruption.

“Fundamental changes will be required to address the current challenges and to avoid repetition of the human rights violations of the past,” said the report.

It calls for immediate action from the Government, which is urged to end reliance on draconian security laws and crackdowns on peaceful protests, and to reverse the drift towards militarisation.

Officials also should show renewed commitment to, and deliver on, security sector reform and ending impunity.

While the security forces recently have shown considerable restraint in response to mass protests, the report noted that the Government has taken a harder line by arresting some student leaders under the Prevention of Terrorism Act and violently suppressing peaceful demonstrations.

Additionally, a heavily militarized environment and culture of surveillance also continues in the north and east of the country.

The UN human rights office urged the new Government to re-launch what it called “a comprehensive and victim-centred strategy on transitional justice and accountability”.

The strategy should contain a time-bound plan to implement outstanding commitments, including taking steps towards the establishment of a credible truth-seeking mechanism and an ad hoc special court.

Victims also must be given a central role in the design and implementation of all accountability and transitional justice mechanisms.

The report also made note of the lack of progress towards establishing the truth about the  Easter Sunday bombings in 2019, in which more than 200 people were killed in a series of explosions at churches and hotels.

The human rights office called for a follow-up independent and transparent investigation, with international assistance and the full participation of victims and their representatives.

Appeal to other countries

“The Sri Lankan State, including through successive governments, has consistently failed to pursue an effective transitional justice process to hold perpetrators of gross human rights violations and abuses accountable and uphold victims’ rights to truth, justice and reparations,” the report stated.

“Rather, they have created political obstacles to accountability, and actively promoted and incorporated some military officials credibly implicated in alleged war crimes into the highest levels of government.”

In the absence of progress towards accountability at the national level, the report urged other countries to cooperate in accountability efforts, including by using available avenues of extraterritorial and universal jurisdiction, to investigate and prosecute crimes under international law committed in Sri Lanka.