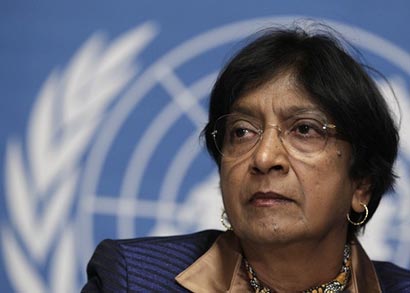 UNITED NATIONS (Reuters) – U.N. human rights chief Navi Pillay said on Monday that she has raised concerns in a letter to Secretary-General Ban Ki-moon about the appointment of a Sri Lankan army general to Ban’s senior advisory panel on peacekeeping.

The Indian Ocean island nation has come under pressure from Western governments and human right groups to account for war crimes they suspect it committed in the final phase of a 25-year war against LTTE rebels, often called the Tamil Tigers.

After a U.N. General Assembly meeting on Syria, Pillay was asked what she thought about General Silva’s appointment to Ban’s Senior Advisory Group on Peackeeping.

“It’s a matter of concern,” she told reporters. “The United Nations has very clear policies on vetting and this is part of the work that my office does.

“We keep a list of individuals who are suspected of committing human rights violations and I have addressed a letter of concern to the secretary-general about this individual,” Pillay said.

U.N. officials say that General Silva was appointed to the advisory panel on peacekeeping by the Asia Group, which consists of U.N. delegations from Asia and the Middle East, not by Ban himself. Ban’s spokesman did not have an immediate response to a request for a reaction to Pillay’s remarks.

A U.N.-sponsored panel said in a report that it found “credible evidence” that the military killed tens of thousands of civilians in the last months of Sri Lanka’s war in 2009 and that both sides committed atrocities.

General Silva is named in that report as the commander of one of “six major battalions (that) were active in the final stages of the war.”

Sri Lanka says that report simply repeats fabricated charges made by the Tamil Tigers’ overseas networks and that its soldiers acted in accordance with international law. The Sri Lankan government has vowed to investigate itself.

The Sri Lankan U.N. mission did not have an immediate response to Pillay’s remarks.

Earlier this month a U.S. court dismissed a lawsuit against General Silva filed by people who say they are relatives of victims of Sri Lankan violence against Tamils, citing his diplomatic immunity as Colombo’s deputy U.N. envoy.