Fishermen take to the streets 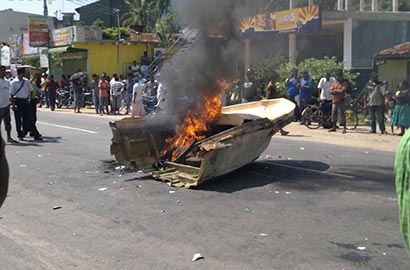 Thousands of fishermen working on some 20,000 boats did not go out to sea yesterday in protest over the massive fuel price increase.

Some 5,000 fishermen in Chilaw marched to the town shouting slogans and blocked the Colombo-Puttalam Road by burning tyres.

They urged the government to reverse the price hike so that they could continue with their livelihood once again. Some fishermen were seen sleeping on the road in protest while some others burnt a boat in the town. Shops in the area were closed.

Similar scenes were witnessed in Negombo with fishermen marching towards the Negombo beach carrying placards. Protests were reported from Mahawewa, Kalpitiya, Wennapuwa and Modera in the Colombo District. Black flags were hung in Modera in protest.

Maxi Fernando who led the protest in Negombo said they were demanding a 50 per cent price cut on kerosene and insisted they were not agreeable to a rationing system which had failed in the past.

He said they would be compelled to continue with the protests if the authorities failed to give a reasonable concession to the fishermen.

National Fishermen Solidarity Movement Convener Herman Kumara said they had no option but to give up their livelihood as they were unable to bear the fuel price hike and added that what hit them most was the price hike in kerosene. The price of kerosene was increased by Rs.35 a litre and as such their daily fuel expenses had risen by Rs.1,500.

Mr. Kumara charged that the government was yet to come up with a detailed explanation on how the subsidy was to be given.

“The government should announce some kind of a package,” he said.  Fr. Abraham said the church is with the fishermen as they were suffering from the massive price hike.

They said Fisheries Minister Rajitha Senaratne had arranged a meeting with all stake holders at 10.00am today.

3 Responses to Fishermen take to the streets

Home » Fishermen take to the streets