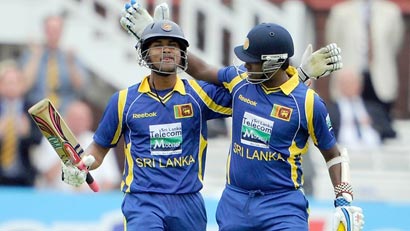 DINESH Chandimal’s unbeaten 105 helped Sri Lanka to a six-wicket victory in the third one-day international against England at Lord’s on Sunday, giving the tourists a 2-1 lead in the five-match series.

Chandimal secured the win, with 10 balls to spare, after flamboyantly going down on one knee to carve James Anderson over cover for four.

His innings was the 21-year-old’s second century in just six matches at this level and meant he’d converted both his fifties into hundreds.

It was put into perspective by a Sri Lankan second-wicket stand of 112 between Chandimal and opener Mahela Jayawardene, who made 79.

“I did well because I just played my normal game,” said man-of-the-match Chandimal. “I thank my captain and team-mates for their support.”

Captain Tillakaratne Dilshan added: “I was a little tense at the end, but they are youngsters, they are learning, and I’m happy with them,” referring

to Angelo Mathews, who took 21 balls for his one not out, nursing Chandimal to his century.

“The important thing for Chandimal was that he won the game for us. We are very confident after the last two games and looking forward to winning the series.”

A dejected Cook said: “We kept losing wickets at the wrong time, we always seemed to be rebuilding. It’s always nice to score runs, but disappointing to do it in a losing cause.”

He was on course for back-to-back hundreds when he cut a Dernbach long-hop straight to Eoin Morgan at point.

In all he faced 77 balls with nine fours.

England’s total would have been far worse had left-handed opener Cook not been dropped on 15 by Jayawardene at slip.

No other England batsman made more than Kevin Pietersen’s 41 in an innings where a top-order collapse had the hosts 4-85.

Cook was run out going for a bye by wicketkeeper Kumar Sangakkara.

The series continues at Trent Bridge on Wednesday.