“United, we could achieve almost any goal” – President at the inauguration of Youth Forum 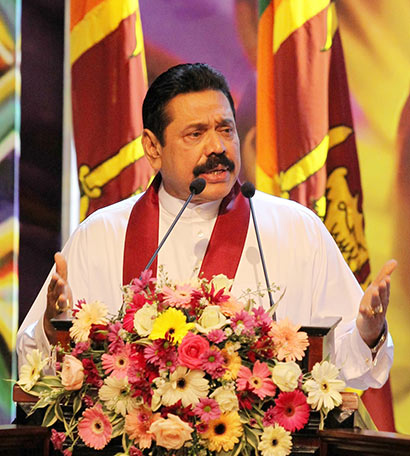 Speaking at the Forum President Mahinda Rajapaksa said that the theme of the Forum, “Inclusive Development – Stronger Together” is very appropriate as it signifies that united, we could achieve almost any goal.

“During Sri Lanka’s tenure of guiding the Commonwealth for the next two years, we will indeed make best efforts to provide constructive and meaningful opportunities to the Commonwealth Youth Delegates to interact with their Sri Lankan counterparts in realizing the objectives of the Commonwealth principles. This we do, in the noble hope that future success of the Commonwealth rests with the continued commitment and contributions of these young people”, the President further added.

Finally the President invited all Commonwealth Nations and those who are outside the Commonwealth to participate in the World Conference on Youth which will be hosted by Sri Lanka in 2014.

The full speech is as follows:-

I wish to extend my warm welcome to all of you to the Commonwealth Youth Forum, on behalf of the youth and the people of Sri Lanka.

The theme of this Forum, “Inclusive Development – Stronger Together” is very appropriate as it signifies that united, we could achieve almost any goal.

We are more than happy to host the Ninth Commonwealth Youth Forum here in Sri Lanka, in this emerging and picturesque city of Hambantota.

As you are aware, terrorism that plagued our country for nearly three decades dealt the biggest blow to our youth. Take the case of a child soldier or a youth forcibly recruited by the terrorists. Those children and youth lost the opportunity of enjoying the beauty of childhood or in the case of youth, experiencing the transition to adulthood. Our youth have therefore been deprived of many valuable opportunities, during this long period. Those children and youth, forcibly recruited by the terrorists and who surrendered, after rehabilitation were speedily freed to the society. I strongly believe the society would help further refine them and bring them back to the mainstream as time goes on.

To get our youth engaged in a dynamic forum dedicated to their cause is a need of the hour for a country like Sri Lanka, and the Commonwealth Youth Forum has done well in bringing the youth of the world to our shores. That this Forum takes place, when we witness peace and unprecedented development in our country makes it all the more significant.

It gives me immense happiness to see at this forum, among other participants, an ex-LTTE combatant, a representative from the indigenous communities of our country, representatives from disabled young people included in the Sri Lankan delegation. It is noteworthy that we abide by the Commonwealth principles of restoring human dignity and equality among human beings in the Commonwealth.

Friends, Today, youth aged 15 to 24, represent one fifth of the world population, with 60 percent of the total youth population living in Asia. In Sri Lanka too, youth comprise a significant percentage, at 26 percent of the total population. This most energetic group of our population, needs to be engaged, enabling them to contribute to the development process. I find that the Forum has chosen sub-themes that are quite relevant to youth, not only in a Sri Lankan context but at a global level, as well. Whilst these address the core needs of the youth, I believe there must be a frank dialogue on another important aspect, that is, protection and safeguarding of young adults from the evils of society. Some of these evils are associated with modern technology. In regard to education and creating quality youth employment, we made a landmark policy initiative in 2010, merging the subjects of youth development and vocational training, under the purview of the Ministry of Youth Affairs and Skills Development. The long term goal is to engage youth who are in pursuit of higher education and others who are not, equally contributing to the development process of the country. We have also introduced, “skills for life and jobs for skills” as an initiative to broaden the benefits for those who have been left behind as failures. Keeping in line with Commonwealth Principles these efforts will help narrow the gap in wealth, now existing among different groups of mankind and contribute towards the creation of a more equitable society.

In this regard, I wish to refer to the Education for All, Global Monitoring Report 2012 of UNESCO, titled, Youth and Skills, Putting Education to Work. It argues that the investment in education would pay off handsomely. For every 1 US Dollar spent on Education, between 10 to 15 US Dollars would be generated in economic growth. The report further says that what is needed is a concentrated effort to upgrade the skills of the whole population and a focus to provide better employment opportunities for most young people, once they have these skills. We, as you would note, place high empha-sis on providing employable skills to youth.

Another significant initiative in our youth development programmes is the creation of the Sri Lanka Youth Parliament. Along with this unique achievement, the establishment of youth clubs throughout Sri Lanka has proven to be viable mechanisms to engage young grass roots level activists in policy formulation and to expose them to the values and norms of the Commonwealth.

Commitment to gender equality is one of the core values and principles of the Commonwealth Charter. Efforts are being made across the globe, among Commonwealth countries to remove inequalities among men and women. The Constitution of Sri Lanka strongly protects and guarantees gender equality. We have the proud record of producing the world’s first woman Prime Minister which shows our commitment to gender equality. Sri Lanka, as a party to international conventions on women such as CEDAW, ensures that there is no discrimination of women in society, or in government.

Our policy in regard to youth development also takes us to the domain of modern technology and thus far, Sri Lanka has been steadily moving towards achieving a high literacy in Information Technology, aiming at 75% by 2016. Virtual space granted through this forum is a facility offered to the youth for networking, thus promoting cross fertilization of ideas, through greater interaction. Equal access to healthcare is of vital importance as health disparities fuel poverty and is damaging to the fundamental objectives of the Commonwealth. Spread of Tuberculosis, HIV, AIDS and Malaria has had devastating effects on our nations. Youth addicted to dangerous drugs has become commonplace. With new technological tools expanding and altering the ways youth can interact with the world, modern technology can be utilized to create awareness on health issues among the youth in the Commonwealth.

Increased investment in recreation and sports facilities would further promote well-being and improve fitness among youth. In this regard, I am happy to see the inclusion of a “diabetics walk” and other sports activities in the Youth Forum Programme. The young delegates will be happy to take part in beach games allowing them to enjoy the sports as well as the beautiful beaches in Sri Lanka.

The Commonwealth Charter recognizes young people because of their positive and active role and contributions they make towards promoting development, peace, democracy and in protecting and promoting core values such as tolerance and understanding, including respect for other cultures. During Sri Lanka’s tenure of guiding the Commonwealth for the next two years, we will indeed make best efforts to provide constructive and meaningful opportunities to the Commonwealth Youth Delegates to interact with their Sri Lankan counterparts in realizing the objectives of the Commonwealth principles. This we do, in the noble hopethat future success of the Commonwealth rests with the continued commitment and contributions of these young people. Finally, it gives me immense pleasure to announce that Sri Lanka will have the privilege of hosting the World Conference on Youth in collaboration with the UN in May 2014, which will be the first in Asia. I would like to invite all Commonwealth Nations and those who are outside the Commonwealth to participate in this global Conference, which I am sure, will help us shape the future of our youth.

When I was young like you, I had a goal, and I always wanted to achieve it. I entered Parliament as its youngest member, and through commitment and hard work, I progressed to become a Minister, Leader of the Opposition, Prime Minister and now the President of our county. I am sure you have the same strength of will and purpose to reach your goal. You have my assurance that during my tenure as Chairman of the Commonwealth, I will stand with you and support you every inch of the way.

In conclusion, on behalf of the people and the government of Sri Lanka, I thank the many organizations and individuals who have worked tirelessly to make this Forum a success. I also like to commend the Commonwealth Secretariat and the Commonwealth Youth Programme for their dedication.

I wish this Forum great success as it addresses the cause of young people and their well-being.

May all your talents be developed to the full to ensure for you a bright future.

May the Noble Triple Gem Bless you all. 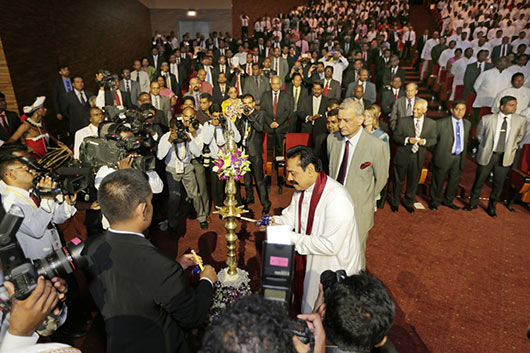 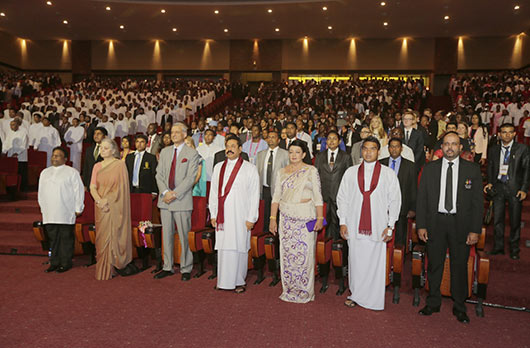 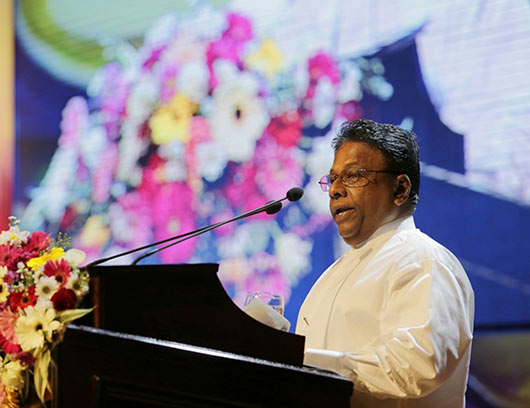 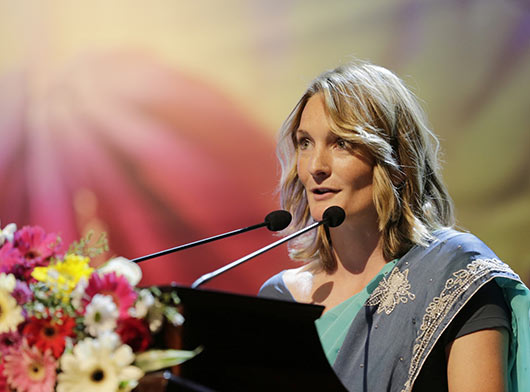 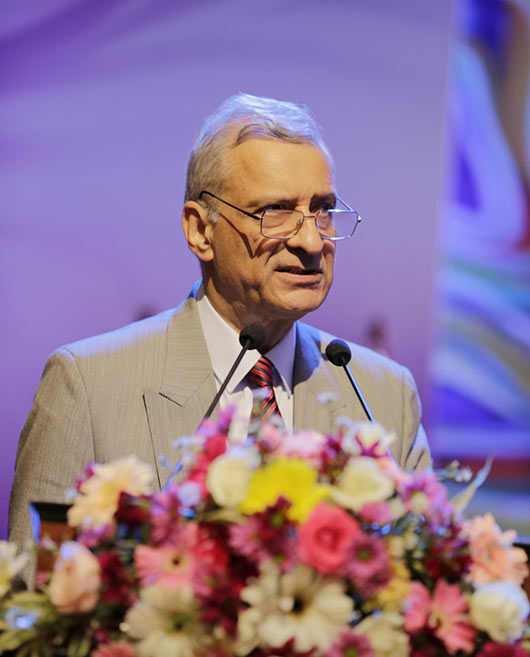 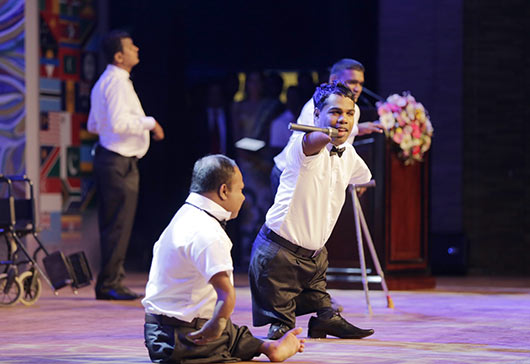 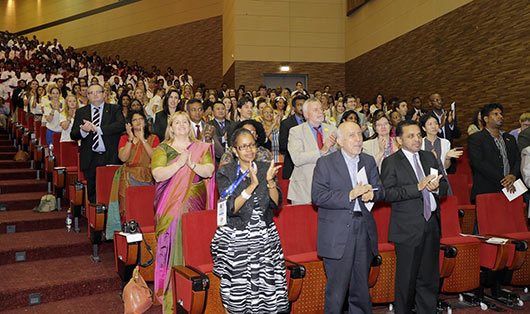 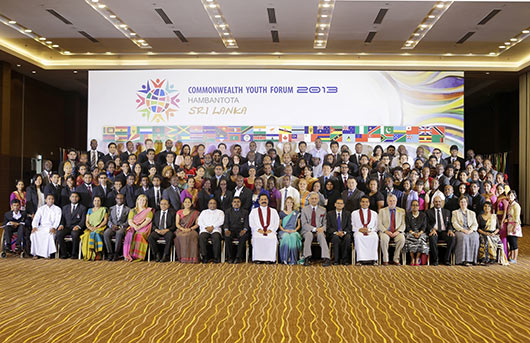 1 Response to “United, we could achieve almost any goal” – President at the inauguration of Youth Forum

Home » “United, we could achieve almost any goal” – President at the inauguration of Youth Forum