UNP DEP. LEADER KARU JAYASURIYA ON WHY EMERGENCY REGULATIONS MUST BE LIFTED 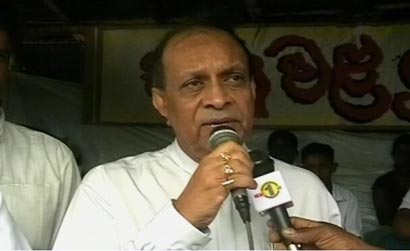 Deputy Leader of the United National Party Karu Jayasuriya has emphasized on the need to lift emergency regulations.

karujHe  stated that  even though the United National Front government removed emergency regulations in 2001, successive governments had kept the state of emergency in force and that even after the war victory, this situation had not changed.

UNP Deputy Leader Karu Jayasuriya went on to point out that  following the war victory, the government had many invaluable opportunities to rebuild the image of the nation and of the country.

He added that even to date, the government uses emergency regulations to suppress those who hold opposing views.

While pointing out that in such a backdrop Sri Lanka is cornered by the International Community, Karu Jayasuriya  observed that there is a risk of a people’s uprising for Democracy much like in Egypt and Libya.

The UNP Deputy Leader has also emphasized that, just as his party predicted earlier, the international community, including India, is pressuring the government to protect Democracy, remove emergency regulations and create an environment where all ethnicities can enjoy equal rights through a political solution.

The release added that eight media associations have already voiced their objections to the government’s attempt to reactivate  the press council, with powers to punish and imprison journalists.

He added that in the final evaluation, it is the entire country and the people who will have to face these repercussions and not political parties or persons donning different colours.

3 Responses to UNP DEP. LEADER KARU JAYASURIYA ON WHY EMERGENCY REGULATIONS MUST BE LIFTED

Home » UNP DEP. LEADER KARU JAYASURIYA ON WHY EMERGENCY REGULATIONS MUST BE LIFTED