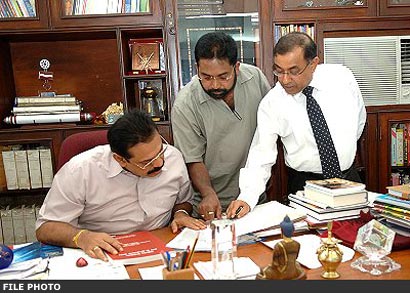 Deputy Minister of Economic Development Ranjith Siyamabalapitiya criticized the UNP for shedding crocodile tears after having once pandered to the wishes of the IMF, to privatise state entities when they were in power at the start of this decade – in the wake of the derision aimed at the budget presented to the parliament last Tuesday (June 29) by Deputy Minister of Finance Sarath Amunugama.
In an interview with Lakbima News, Deputy Minister Siyambalapitiya insisted that the budget presented proved the UPFA government’s long-term commitment to vital sectors as defence, education, health and assistance to vulnerable groups, rural community, traditional and small scale enterprises, public servants and the working population to improve their living conditions.
He also dismissed suggestions that the UPFA was under pressure from the IMF to balance its books and expressed his optimism that the government would cut the deficit to 8 percent of gross domestic product (GDP) this year from 9.9 percent in 2009.
Interview –

One of the main criticisms levelled at the budget presented to the parliament last Tuesday is that the UPFA has danced to the tune of the IMF. What are your comments?

Can the UNP or the JVP substantiate this clumsy claim that the government has danced to the IMF tune. This is the sole political slogan that they can get hold of at this juncture, as they are both bereft of other solid material to cling on to.
The opposition is down in the dumps and in my honest to god estimation politically groping in the dark and they have no constructive criticism to direct at the UPFA, hence this shedding of crocodile tears in the parliament.
You need to examine the budget and see whether we have pandered to the wishes of the IMF or not.
These budget proposals are aimed at enhancing and maintaining funds for several vital sectors like defence, education, health, support to lower-income groups, traditional and small-scale enterprises and for improving their living conditions on the whole.
As a responsible government we have at no stage envisioned to cut off the benefits channelled to sectors such as Samurdhi, fertilizer, education, heath etc hence there is no validity of whatsoever to the opposition criticism directed at the government, as holding placards in the legislature is only a gimmick to show to the people that they are vibrant and not listless.

The government having promised to carry out a salary hike for public servants during the last presidential and general elections have deceived the very people who elected it by refusing to present proposals to that effect in this budget and isn’t this the truth?

This claim again is invalid and it is wrong to assume that the government has deceived the public servants by not acceding to a salary hike. The intended salary hike will come about during the 2011 budget proposals which will be presented to the parliament in November and it is almost written in stone and furthermore that is guaranteed.
From January this year, the government increased the COL for public servants by 750 rupees and it has shot now from 4500 to 5250 rupees for the remaining five months and would we have resorted to such a tactic if the government was not truly concerned of the economic plight of the public servants.
Considering what the UNP did to the public entities when they were in power by resorting to privatise en-masse and on the advice of the IMF – this government is keen to protect state entities while opening other revenue streams.
Therefore the public servants need not be unduly worried, as their promised pay hike will be given come 2011.

The budget has estimated to gain revenue to the tune of 817 billion rupees this-year what assurance can the government give in this regard? Because, the 2009 Budget anticipated Rs.855 billion revenue but finally the government was able to collect only Rs.699 billion.

The people have placed their trust in the government and it is the duty of the state to meet the peoples’ aspirations, hence we are confident of earning revenue to the above-estimated figure as put across in the budget.
All unnecessary expenditures will be curbed and through the programmes underlined by the ministry of finance and economic development we hope to achieve these tasks in the short- to long-term. It won’t be a case of undue burden on the masses that much I can guarantee.

A lot of funds allocated to vital ministries such as justice, health, higher education and agriculture have been reduced, why has this kind of measure been undertaken?

On the contrary we have not reduced funds but given them adequate allocation to enable them to continue to provide the benefits to the people.
Just because 5 percent of funds have been scrapped from the health ministry it is wrong to assume that the people will be hard-pressed to seek medicine from the state-run hospitals and that they will be compelled to opt for private sector services.
Yes it is true that a few of those funds have been curtailed due to several factors and it does not mean that the government is burdening the people and the current increase in COL has more to do with the increases in prices in the world market but we are keeping a close tab on everything.
It is also a case of balancing the funds to several important ministries and you must not forget that the government is compelled to grapple with maintaining a tight leash on an expanding defence expenditure and despite that challenge we have not neglected any of the crucial ministries that you talk of even in the past and you must not find fault with the government for the mere sake of it.
We have set in motion a sound economic plan and the country will be better for it in the short to long-term.

The government also has attracted widespread criticism for having allocated a lot of funds to a few ministries commanded by a formidable set of ministers, do you agree?

No I disagree. It is wrong to surmise that the government has disbursed funds to only a few ministries under certain powerful ministers.
The government is keen on maintaining high defence spending at about $ 1.65 bn, restructuring debt-ridden state-owned energy businesses, raising taxes on tobacco, alcohol and wheat, halving import duties on electronic goods and on vehicles to spur economic growth and developing tourism, housing and rural areas during the next six years.
In the medium-term, the government will be looking to bridge the gap by widening the tax net through the implementation of a more people-friendly tax system with simpler rules and lower levels for income and company tax.

What does this budget on the whole represent to this country?

This budget is primarily intended at reining in a large public deficit, while maintaining high defence spending which has come about as a legacy of the 30-year ethnic conflict with the LTTE which we finished for good last May.