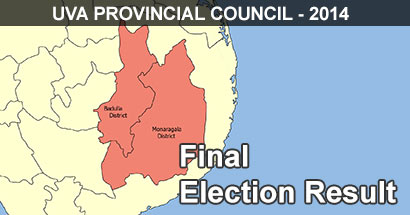 The Uva Provincial Council elections have been won by the United People’s Freedom Alliance led by President Mahinda Rajapaksa getting a total of 349,906 votes from all two districts.

They have secured 17 seats in the final overall results of the polls. The main opposition the UNP came second getting 274,773 votes and securing 13 seats.

The JVP became third in the race with 36,580 votes and securing 2 seats in the Uva Provincial Council.