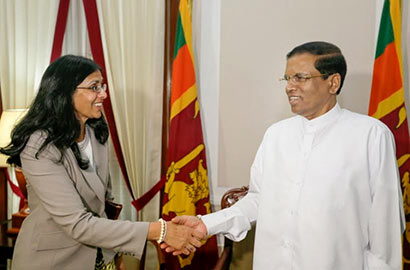 Ms Biswal said that President  Sirisena and Prime Minister Wickremasinghe have put forth an ambitious agenda for their first one hundred days and much has already been accomplished in such a short time. But we recognise that there is a lot of hard work ahead and some difficult challenges.”

She also said that Sri Lanka can count on the United States to be a partner and a friend in the way forward. Whether it is on rebuilding the economy, on preventing corruption and advancing good governance, and ensuring human rights and democratic participation for all of its citizens.  US look forward to growing and deepening the partnership between the two countries, to advancing trade and investment, she added.