US back to Lies : Lied on Iraq WMD – Now lying about Sri Lanka War Crimes

ENOUGH PROOF REMAINS TO SHOW AMERICA IS A SERIAL LIAR – THE WORLD NEEDS TO HAVE SERIOUS RESERVATIONS ABOUT ITS CREDIBILITY.

The lies/fabrications and stories created by the US Government in order to invade Iraq are no small number:

What the American public need to realize is: 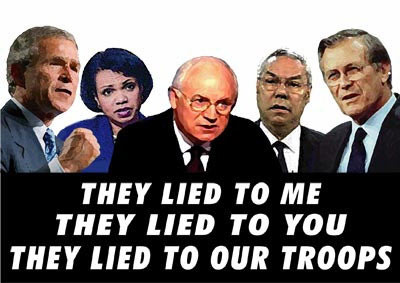 For the US , WMD is defined as Words of Mass Deception !!!

What sovereign governments voting at the UN and its assemblies in particular the UN Human Rights Council need to ask themselves is will their decision to endorse Resolutions by the US end up creating catastrophes that Iraq, Kosovo, Afghanistan, Libya, Sudan and similar countries today suffer from.

Sri Lanka is being unnecessarily targeted for eliminating terrorists banned by 32 nations. Nations of the world must be aware of the suffering of 20million people under 3 decades of LTTE terror and take cognizance of their suffering too.

If the Pentagon is using deception should the world’s SOVEREIGN nations think twice about endorsing what US asks of them – including that of agreeing to every Resolution brought by US to the UN even the watered-down ones.

Do leaders not have moral obligations to humanity anymore?

9 Responses to US back to Lies : Lied on Iraq WMD – Now lying about Sri Lanka War Crimes

Home » US back to Lies : Lied on Iraq WMD – Now lying about Sri Lanka War Crimes