US breaching IHL by killing civilians with unmanned drones 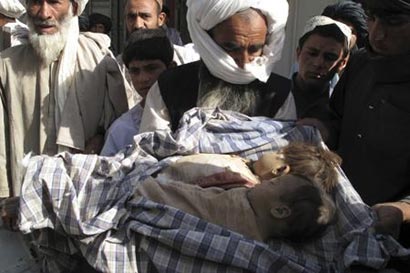 The list of crimes committed by a single state over the last couple of decades is appalling to say the list. Like a bull in a china shop it simply continues to target and strike with little care for any international laws or humanitarian treaties most of which it has not signed but feel no remorse to quote it upon other nations demanding “accountability” and transparency. The Unmanned aerial vehicles (UAVs) known as drones has become a favored mode of targeting the enemy, 62% of US citizens even approving such attacks without being aware that 80% of drone targets end up killing ordinary civilians and children. Drones are the new soldiers abroad – non-emotive machines that kill not only the enemy but anyone else in sight as well.

While President Bush preferred a cowboys and Indians approach to targeting terrorists, Obama administration has preferred to rely increasingly on the usage of drone strikes as they are cheaper to make than military aircrafts and there is no danger of crew casualty. Today, drones have become a common feature in Afghanistan, Pakistan, Somalia and Yemen.

The country that enjoys issuing countless statements on human rights abuses of other nations, sending envoys with hard hitting messages on upholding human values and maintaining the dignity of human life does not even allow independent investigations of civilians killed by these drones leaving international agencies to work on estimated death figures. The statistic however tragically declares that for every terrorist killed from these drones 10 civilians end up being sacrificed. As such thousands have died and no one knows the exact number and very few human rights organizations even care questioning their stand on their silence when drone attacks are a common every day feature on a “war on terror” and civilians have ended up the game.

While UN Secretary General has been careful about his comments on drone strikes, the UN Special Rapporteur on Extrajudicial, Summary or Arbitrary executions Philip Alston asked the US to “specify the bases for decisions to kill rather than capture particular individuals… and to make public the number of civilians killed as a result of drone attacks and the measures in place to prevent such casualties”. With thousands of US and Allied troops in Afghanistan over a period of 10 years and no attack on US since 2001 we can but ask who this enemy of the US exactly is and on what basis US describes its presence in Afghanistan as a Just War?

While US quotes international laws to other nations, it shows callous disregard for the application of such laws to its own actions and its own human rights researchers from Stanford Law School and New York University School (report titled Living under Drones) have from its findings and interviews declared that drones were not only damaging and counter-productive that the strikes upon a nation not at war with the US do more harm than good and force the people to live in a state of constant fear.

While US continues to force nations to implement mechanisms for accountability it has shown no desire to take measures to rectify the collateral damage, or to divulge true civilian casualty figures or to allow independent investigations into drone deaths as well as to compensate the civilians. So we have a situation where the US is purposely hiding the deaths of civilians while preaching to other nations to be transparent!

The US has always been quick to change terminologies in order to ensure international laws are not applicable to any of its actions – not that US would care to follow these international laws even if it did. However, with the series of violations throughout history and the rising number of war crimes that the US continues to commit we can but question what the world peace bodies can do about it except to release statements deploring such acts. However, it is interesting to note that with Palestine winning itself a historical place in the UN how it will use its cards to bring the US to the ICC for war crimes against the State of Palestine! Yet the US is not a member of the ICC and to bypass international laws the US is now using contractors to do their dirty work!

Another case to take note of was the 2011 drone attack in Pakistan killing 42 of which only 4 were confirmed Pakistan Taliban and the families of the victims filed a case with the High Court and the Government was called to “pursue and criminally” charge those involved whether inside or outside the country.

While drones continue to strike and kill the debate on the legality of such attacks goes unabated – but these remain just debates with no actions taken against US or its Allies and no reduction in the drone strikes. The basis of deploying a specific use of force depends on whether an armed conflict exists and it is only then that international humanitarian laws apply to strike a balance between military necessity and meeting the needs of humanity.

However, the US interpretation on the “War on Terror” is that the US and only the US can do what it likes, where it likes and to whoever it likes and no laws international or otherwise can apply.

So what about the sovereignty of Pakistan or for that matter Libya when the US and Allies violates the sovereignty of countries and more over carries out drone strikes that target and kill mostly civilians? This is a fundamental violation for which US stands accused but nothing has been done about it. Nothing was even done about the manner in which NATO enjoys striking at civilian and infrastructure in other countries as well. In Libya NATO fired 7600 missiles! US attack on Iraq in 2003 was also a violation of international humanitarian law – nothing was done against the US and so a single state along with its allies continues to rock the fabric of humanity by continuously indulging in a warfare that is one-sided and of no national interest except to forge business deals amongst those making profits from the wars and conflicts taking place while committing trillions of US taxpayers money towards the destruction.

However while UN Special Rapporteurs, Christof Heyns and Ben Emmersosn have declared that in 2013 the UN would form an investigations unit to examine the legality of drone attacks on civilian death, the UN Secretary General wants to use drones in Africa! With 17,500 peace keepers in Congo, the UN is planning to ask member states to carry out drone attacks on Congo rebels which is certainly a conflict of interest.

So what extent can the US really be preaching to other nations when it blatantly commits crimes upon humans totally disregarding the dignity of life? Nevertheless, international media most of which belong to pro-US lobbies will never highlight any of the atrocities that the US commit on a daily basis.

It is baffling why China and Russia do not lobby amongst the growing number of nations exasperated by the bullying of US and its Allies and create a forum that would finally tell the US and its Allies to put an end to the lies and hypocrisies that exist because their numbers certainly outnumber those of the US and Allies.

Home » US breaching IHL by killing civilians with unmanned drones