US case against Shavendra dismissed 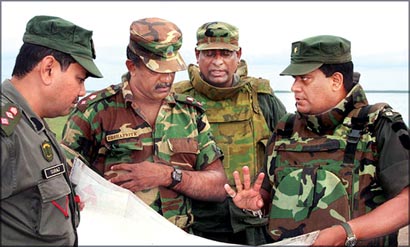 Vathsala Devi filed the case demanding compensation from the senior army officer who commanded the Army’s 58th Division involved in the military operation that defeated the terrorists in 2009.

The order was given by New York District Judge J. Paul Oetken. The plaintiffs were Vathsala Devi and Seetharam Sivam. Major General Silva was represented by Timothy G. Nelson.

Major General Silva told the Daily Mirror from New York that the court case was a good opportunity to the rest of the people living in the US to see how the remaining LTTE members operated.

“Wherever it may be I am ready and I will safeguard the dignity of my country and my men who fought along with me in defeating the LTTE and rescuing thousands of innocent civilians from terrorist clutches,” he said.

“According to information I have gathered Vathsala had fled the country during the last stages of the war to South Africa and is currently living there,” Major General Silva said.

The wife of former LTTE Eastern Commander Ramesh filed a law suit in the US against Major General Silva and received summons on September 24, last year in this regard. The wife of Ramesh was formerly a member of the LTTE female wing.

2 Responses to US case against Shavendra dismissed

Home » US case against Shavendra dismissed