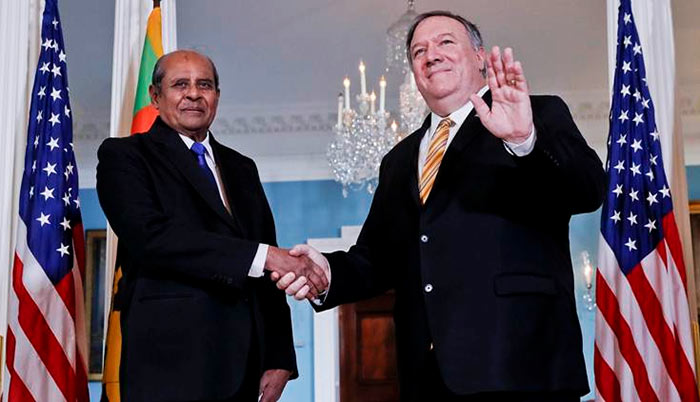 The United States and Sri Lanka have agreed to expand military-to-military cooperation, the governments announced in a joint statement issued following high level talks in Washington.

In accordance with the overall US-Sri Lanka relations, the US has offered to continue to expand counterterrorism and maritime and border security cooperation with Sri Lanka.

The statement followed talks between Foreign Affairs Minister Tilak Marapana and U.S. Secretary of State Michael R. Pompeo on May 16.

Talks took place amidst severe criticism by the Opposition of expanded military ties with the US and the subject of defence coming under the President, who is also the commander-in-Chief.

The following is the text of the statement issued following Third US-Sri Lanka Partnership Dialogue: Sharing a commitment to democracy, human rights, and the rule of law, the United States and Sri Lanka convened the third U.S.-Sri Lanka Partnership Dialogue on May 16, 2019, in Washington, DC. The meeting was co-chaired by the Minister of Foreign Affairs of Sri Lanka Tilak Marapana and U.S. Under Secretary of State for Political Affairs David Hale.

Both governments reaffirmed the importance of the bilateral relationship, firmly rooted in shared values as fellow democracies and committed to working together to further strengthen the partnership.

support, including multi-faceted assistance from the U.S. Embassy in Colombo and investigators from the Federal Bureau of Investigation. The two sides discussed possible areas of future assistance as well. The terrorists who struck Sri Lanka on Easter appear to have drawn inspiration from ISIS. In this context, Sri Lanka was briefed about the Global Coalition to Defeat ISIS. The United States offered to continue to expand counter-terrorism and maritime and border security cooperation with Sri Lanka.

The United States and Sri Lanka resolved to work together to foster peace and security and ensure a safe maritime domain in the Indian and Pacific Oceans through a rules-based order that ensures respect for international laws and norms. In this context, the U.S. strategy towards a free, open, and prosperous Indo-Pacific region, which ensures freedom of navigation, overflight, and unimpeded commerce was acknowledged as an important initiative. They shared the intention to further promote cooperation and exchanges in

maritime security and safety, and noted with satisfaction the Indian Ocean conference hosted by Sri Lanka in October 2018, and agreed to continue to pursue joint initiatives to enhance security, stability, transparency, and economic opportunity for mutual benefit.

Sri Lanka welcomed the arrival of the Secretary Class High Endurance Cutter transferred through the U.S. Excess Defense Articles program to advance mutual interests in building Sri Lankan capacity to monitor its territorial waters, counter smuggling and other illegal activity, and enhance its humanitarian assistance and disaster response capability in the

The United States government welcomed the renewal of Sri Lanka’s commitment to promote reconciliation, accountability, justice, and human rights in pursuit of lasting peace and prosperity. The United States acknowledged progress in these areas, including on the mandate of the Office of Missing Persons, passage of legislation to establish an Office of Reparations, and the return of private land used by security forces.

The government of Sri Lanka emphasized its commitment to strengthening democracy, democratic institutions and practices, good governance, the rule of law, justice and parliamentary procedures. The United States encouraged Sri Lanka to sustain momentum in the implementation of these commitments.

The United States and Sri Lanka expressed support for strong economic partnership and growing bilateral trade based on the principles of fairness and reciprocity. The two

governments welcomed the approval of a $480-million compact by the Millennium Challenge Corporation Board. Signature of the compact is pending Congressional approval

in the United States and Cabinet approval in Sri Lanka.

Together, the United States and Sri Lanka emphasized the importance of their bilateral relationship and expressed commitment to further strengthen the U.S.-Sri Lanka partnership for mutual benefit.”