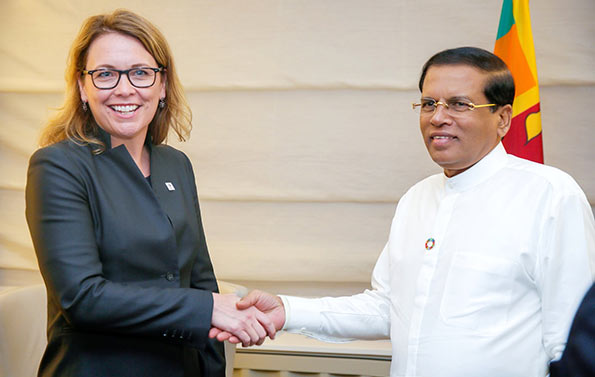 The United States Millennium Challenge Corporation (MCC) has selected Sri Lanka for its Threshold Programme, under which assistance will be provided for selected projects. The MCC Chief Executive Officer, Ms Dana J Hyde called on President Maithripala Sirisena yesterday (September 20) at the Loews Regency Hotel and stated that MCC team is already in Sri Lanka for the preparation of a feasibility report, which will be presented to the MCC Board of Directors in December 2016.

The Board will, then, decide on the projects to be implemented in Sri Lanka, she said. The CEO added that the MCC will assist several projects to assist the realization of Millennium Development Goals (MDGs).

President Sirisena thanked the MCC for selecting Sri Lanka for assisting under the Threshold Programme and recalled that the US has been assisting Sri Lanka for several decades starting with the help provided for preparation of a Feasibility Report for Mahaweli Hydro Electric project as early as in 1950s. “Today it is Sri Lanka’s biggest multipurpose project,” he said.

2 Responses to US Millennium Challenge Corporation to assist Sri Lanka