US urges for Parliament to be reconvened 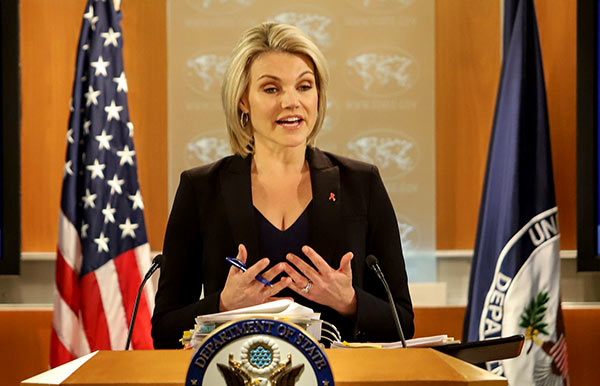 In a tweet, Spokesperson for the US State Department Heather Nauert said further delay compounds uncertainty in Sri Lanka and undermines its international reputation and the aspirations of its people for good governance, stability and prosperity.

Meanwhile also commenting on current political developments in Sri Lanka, UK Minister of State for Asia and the Pacific Mark Field said the position of the UK is that it recognises states and not governments.

He said this in response to a question asked by Shadow Foreign Secretary Emily Thornberry on Monday whether the British Government recognises Ranil Wickremesinghe or Mahinda Rajapaksa as the Prime Minister of Sri Lanka. State Minister Field said they were deeply concerned by the political situation in Sri Lanka.

He said “I have called on all parties to ensure that the constitution is respected and due political and legal process upheld. On October 29, I made a public statement urging the President, in consultation with the Speaker, to reconvene parliament immediately to give the democratically elected representatives of the Sri Lankan people their voice.”

1 Response to US urges for Parliament to be reconvened

Home » US urges for Parliament to be reconvened