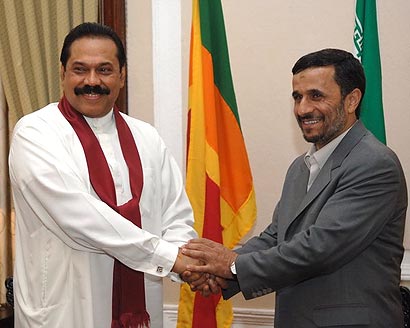 The whistle blower website Wikileaks today revealed a diplomatic warning given by the United States to Sri Lanka over its close relations with Iran. The cables reveal conversations between the US embassy officials and Central Bank governor Ajith Nivad Cabraal and the then foreign secretary Palitha Kohona.

1.(C) Summary: The Ambassador and DCM told the Governor of the Central Bank of Sri Lanka and the Secretary of the Ministry of Foreign Affairs, respectively, that Sri Lanka should be cautious about deepening its trade relationship with Iran, in light of the recent ref A Financial Action Task Force (FATF) advisory. The Ambassador and DCM reiterated that weapons procurement from Iran would be illegal under UN Security Council Resolution 1747, and would have serious negative consequences for U.S.-Sri Lanka relations. Both Governor Cabraal and Secretary Kohona replied that Sri Lanka does not intend to purchase arms from Iran. Both asserted that President Rajapaksa’s trip to Iran in late November would be focused on trade and investment, but a well-connected embassy source quoted to us a government minister saying that Sri Lanka would try to negotiate a contract for $200 million worth of oil from Iran at below-market prices, in exchange for which Sri Lanka would order a significant quantity of arms. End summary.

2.(C) Ambassador told Central Bank Governor Cabraal November 1 that Sri Lankan President Rajapaksa’s planned late-November trip to Iran (ref B) would attract negative attention in Washington, as both the UN and the United States had recently imposed strengthened sanctions against Iran for its proliferation-, nuclear-, and terrorism-related activities. As a friend, the Ambassador said, the United States urged Sri Lanka “to be very scrupulous” in entering into additional trade or investment deals with Iran. The Ambassador conveyed the recent Financial Action Task Force (FATF) announcement that Iran’s anti-money laundering and counter-terrorism financing regime was deficient and that members should regard doing business with Iran as risky.

3.(C) Cabraal stated that he was aware of the UN obligations and that the Central Bank had advised Sri Lankan banks to sever ties with Bank Sepah (ref C), a process that was underway. After asking the Ambassador to describe further what issues made contact with Iran so problematic, Cabraal listened carefully and seemed responsive to the Ambassador’s advice that senior GSL officials should do their best to ensure that President Rajapaksa was aware of the possible harmful consequences of strengthening relations with Iran.

4.(C) DCM delivered a similar message to Foreign Secretary Palitha Kohona later in the day, cautioning that closer business ties could end up inadvertently enmeshing Sri Lankan firms with Iranian banks or firms created to avoid sanctions. DCM also emphasized that UNSCR prohibited Iran from exporting any arms or related materiel. Kohona acknowledged that Sri Lanka could no longer purchase arms from Iran, but was not categorical about it: he was “reasonably confident” that there would be no arms deals during the president’s upcoming trip. Commercial transactions between the two countries would continue, he said, since Iran was an important buyer of Sri Lankan tea and such transactions were not prohibited by UN sanctions. Kohona noted that the President would travel without any of his ministers, since COLOMBO 00001506 002 OF 002 all were members of parliament whom the government had instructed to remain in Colombo throughout the November budget debate. Prior to visiting Tehran, Rajapaksa will attend a Commonwealth Heads of Government meeting in Kampala November 23-25.

5.(S) A well-connected and reliable embassy source reported that Minister of Disaster Management and Human Rights Mahinda Samarasinghe told him that arms purchases may in fact be a goal of President Rajapaksa’s trip to Tehran. He said Sri Lanka would try to negotiate a contract for $200 million worth of oil from Iran at below-market prices, in exchange for which Sri Lanka would order an unspecified but significant quantity of arms. According to our source, Samarasinghe explicitly noted that the GSL also hoped the transaction would “send the U.S. a message.”

6.(C) Comment: Post welcomes any guidance from the Department prior to President Rajapaksa’s planned late-November trip, and will apprise the Department of details we learn about the visit after it concludes.
MOORE

Courtesy: Daily Mirror – Pix by AT

3 Responses to US warning on Sri Lanka– Iran relations