US websites suspended after federal shutdown 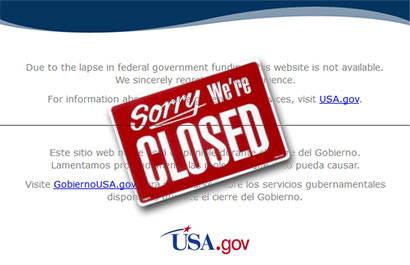 Nasa’s website was unavailable as non-essential services were closed, and the White House web page was not being updated, after a lapse in federal funding.

The US Department of Homeland Security was not responding to public emails submitted via its website.

US government employees affected by the shutdown were not able to access email.

Republican opposition to President Obama’s healthcare reform law, the Affordable Care Act, lead to the the government shutdown on Tuesday.

The act, known also as Obamacare, has caused legislative deadlock. Congress failed to pass legislation to fund the government on Monday.

Thousands of federal workers who had been sent home on Tuesday were barred from accessing work emails as part of US government policy.

The same US law which gave the legal basis for the shutdown, the Antideficiency Act, also prohibited work “via mobile devices or remote computer connections” for employees who had been sent home.

Communications channels for members of the public were also affected by the shutdown.

US citizens can normally use federal websites and Twitter feeds to put queries to government institutions.

On Tuesday, email questions from the public were not being processed by US bodies including the US Department of Justice and the Department of Homeland Security.

“Due to the lapse in government funding, information on this website will not be routinely updated, the transactions submitted via the website may not be processed, and the department may not be able to respond to inquiries until funding has been restored,” read a notice on the Department of Justice site.

People trying to reach Nasa’s main website were redirected to a US government notice explaining that the page was not available.

Other federal websites such as the US Department of Agriculture and the US Census Bureau displayed holding pages.

Dozens of Twitter feeds, including tweets from the National Park Service for the Statue of Liberty, were stopped.

Smaller federal institutions such as the Smithsonian National Zoo were affected by the shutdown.

The zoo’s webcams, which normally stream images of giant pandas, cheetahs, flamingos, and naked mole rats, were also down.

“None of our live animal cams will broadcast,” said a notice on the Smithsonian National Zoo web page. “The cams require federal resources, primarily staff, to run and broadcast. They’ve been deemed non-essential during the shutdown.”