US welcomes passage of UNHRC resolution on Sri Lanka 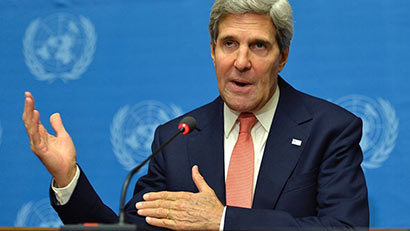 Washington: The United States has welcomed the passage of UNHRC resolution on Sri Lanka and said it sends a “clear message” to the Rajapaksa government that the international community is committed to promote peace, stability, and prosperity in the Asian country.

“Today’s vote sends a clear message that the international community is committed to working with the Government of Sri Lanka to promote greater peace, stability, and prosperity for all of the people of Sri Lanka,” spokesperson of the National Security Council, Caitlin Hayden said on Thursday.

She said that the US agrees with the resolution’s request to investigate alleged violations and abuses of human rights during the conflict and to monitor the human rights situation in Sri Lanka.

US Secretary of State John Kerry also said the UNHRC decision “sends a clear message” to the Rajapaksa government that the time to pursue lasting peace and prosperity is now.

He also expressed deep concern over recent actions against some of Sri Lanka’s citizens, including detentions and harassment of civil society activists.

Noting that the Sri Lankan people are resilient, Mr. Kerry said they have demonstrated grit and determination through years of war.

“Now, they are demanding democracy and prosperity in years of peace. They deserve that chance,” he said.

The UNHRC resolution reaffirms the commitment of the international community to support the Government of Sri Lanka as it pursues reconciliation and respect for human rights and democratic governance, Kerry said.

“That’s why the resolution requests that the Office of the High Commissioner for Human Rights continues monitoring the human rights situation in Sri Lanka.”

“That’s why it calls on the Office to conduct an investigation into allegations of serious human rights abuses and related crimes during Sri Lanka’s civil war. And that’s why the United States will continue speak out in defence of the fundamental freedoms that all Sri Lankans should enjoy,” he said. (Deccan Chronicle)

Home » US welcomes passage of UNHRC resolution on Sri Lanka