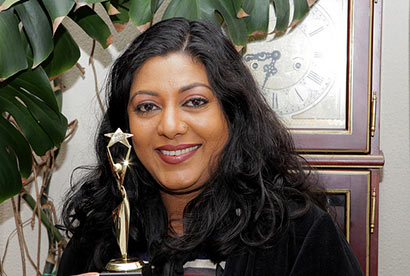 Popular actress Rebecca Nirmalee who shot to fame with her iconic role as Veda Hamine, passed away this morning after losing a battle with cancer.

Rebecca who was to celebrate her 50th birthday on November 27 this year, studied at Nivanthaka Chethiya Vidyalaya in Anuradhapura.

The actress who played pivotal roles in more than 150 tele dramas and some films,  started her acting career via stage plays like Lokaya Suddai and Sudu Samanalayo. Later she followed it up with other plays like Uthure Rahula and Amal Biso.

It was Jayantha Chandrasiri who chose her to play Veda Hamine which became an instant hit among the masses.
She has acted in a few films too including the Indian production ‘Kangalil Kaithi Seithen’ directed by Bharathi Raja.

“My experience in London during and after the grand premiere will linger in my memories forever. The premiere itself was well organised. The film was directed by Wimal who played the lead role while his wife Kanthi Alahakoon produced it. Rodney Vidanapathirana scripted the gripping story. The income grossed at the premiere was donated to the retired war heroes fund here in Sri Lanka,” Rebecca told Daily Mirror on her return to Sri Lanka after the film’s premiere in London recently.