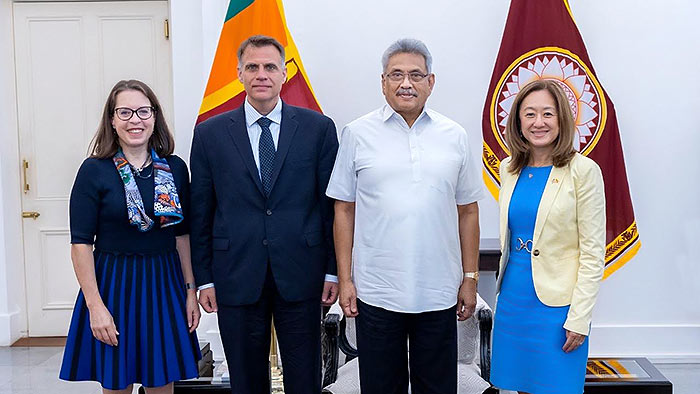 The U.S. Ambassador to Sri Lanka, Deputy Assistant Secretary of Treasury for Asia Robert Kaproth and Ambassador Kelly Keiderling, who is also the Deputy Assistant Secretary of State for South and Central Asia met with the President to discuss Sri Lanka’s economic crisis and explore ways that the United States can support the island nation’s economy.

The delegation arrived in Sri Lanka yesterday morning (June 26) for a three-day visit.

Over the past two weeks, the United States has announced $120 million in new financing for Sri Lankan small and medium-sized businesses, a $27 million contribution to Sri Lanka’s dairy industry and $5.75 million in humanitarian assistance to help those hit hardest by the economic crisis.

The United States also committed $6 million in new grants to provide livelihood assistance to vulnerable populations, and technical assistance on financial reform that will help stabilise the economy.

In the coming months, the United States will continue to support Sri Lankans as they revive their economy, combat food insecurity, and promote public health and education, the statement said.

The United States said it also strongly supports Sri Lanka’s decision to seek assistance from the International Monetary Fund, which can provide the most durable resolution to the present crisis.