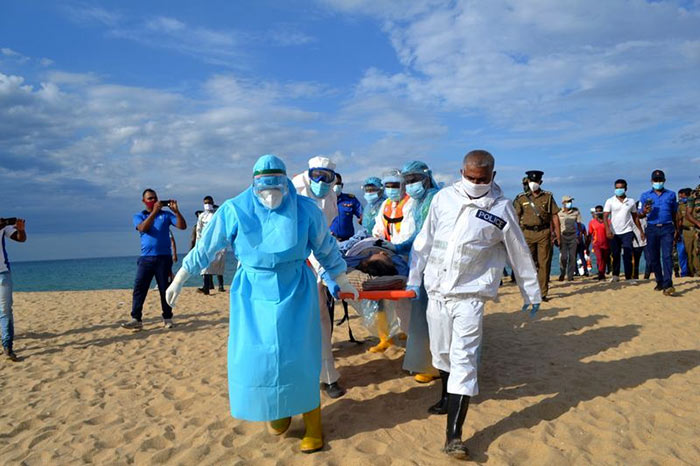 Sri Lankan authorities said there was no immediate danger to the coastline should there be a leak from the New Diamond, which was carrying 270,000 tonnes of crude and 1,700 tonnes of diesel, but they remain concerned about the possibility.

The vessel — which had a crew of 18 Filipinos and five Greek nationals — issued a distress call Thursday after an engine room explosion, navy spokesman Captain Indika de Silva said.

One Filipino crew member was missing, another was injured, and the rest were rescued from the Panama-flagged vessel, the navy said.

The ship’s third officer, also a Filipino, had suffered serious burn injuries and was taken to the Kalmunai hospital, 360 kilometres (225 miles) east of the capital Colombo.

“An Indian coast guard vessel and one of our ships are now in the process of dousing the flames that have spread to the deck of the tanker’s service area,” de Silva told AFP.

The goal was to keep the fire from reaching the cargo.

He said two Russian anti-submarine ships, Admiral Tributs and Admiral Vinogradov, had also reached the stricken vessel, but later withdrew as they could not effectively battle the fire.

Two tugboats from Sri Lanka’s southern port of Hambantota, loaded with firefighting equipment, were expected at the scene to join the battle against the fire.

Fears of a spill

The New Diamond is classified as a very large crude carrier (VLCC), and is about 330 metres (1,080 feet) long.

The stricken vessel is a third larger than the Japanese bulk carrier MV Wakashio, which crashed into a reef in Mauritius last month leaking over 1,000 tonnes of oil into the island nation’s picturesque waters.

Sri Lankan officials said they were hopeful of containing the New Diamond fire and eventually putting it out.

But they warned they could need help if a major spill were to occur, as they lack the proper equipment to deal with that.

The New Diamond had been travelling from Kuwait to the Indian port of Paradip.