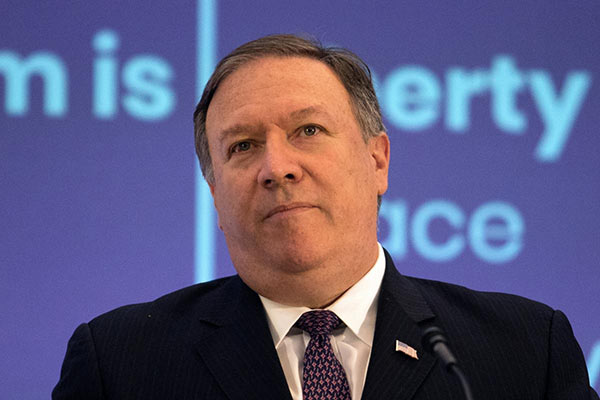 U.S. Secretary of State Mike Pompeo announced $113 million in new technology, energy and infrastructure initiatives in emerging Asia on Monday, at a time when China is pouring billions of dollars in investments into the region.

In a policy speech delivered amid increased U.S. trade frictions with China and other Asian countries, Pompeo sought to define the economic aspect of President Donald Trump’s “Indo-Pacific” strategy, which aims to cast the United States as a trustworthy partner in the region.

Pompeo said Washington wants a “free and open” Asia not dominated by any one country, an apparent reference to China’s growing economic clout and heightened tensions in the disputed South China Sea.

“Like so many of our Asian allies and friends, our country fought for its own independence from an empire that expected deference,” Pompeo told the U.S. Chamber of Commerce. “We thus have never and will never seek domination in the Indo-Pacific, and we will oppose any country that does.”

“These funds represent just a down payment on a new era in U.S. economic commitment to peace and prosperity in the Indo-Pacific region,” Pompeo said.

Pompeo said he will visit Malaysia, Singapore and Indonesia this week, where he planned to announce new security assistance.

U.S. officials said the American strategy does not aim to compete directly with China’s Belt and Road Initiative, which involves dozens of countries in an estimated $1 trillion of mostly state-led infrastructure projects linking Asia, parts of Africa and Europe, but rather to offer a more sustainable alternative by encouraging private-sector investment.

Eswar Prasad, a Cornell University trade professor and former head of the IMF’s China division, said the U.S. initiatives are tiny in comparison to China’s.

“In both scale and scope, these initiatives pale in ambition relative to comparable initiatives by China,” Prasad said. “It also highlights the distinction between China’s approach of bold and grand government-led initiatives and the much more modest role of the U.S. government.”

Analysts said it was difficult to see the U.S. effort generating much excitement in the region, especially given Trump’s habit of undercutting his policy makers on issues ranging from trade to dealings with North Korea.

“The announcement of $113 million to fund economic engagement for the entire region feels a bit underwhelming,” said Daniel Russel of the Asia Society Policy Institute, until last year the State Department’s top diplomat for East Asia.

Countries in the region have been worried by Trump’s “America first” policy, withdrawal from the Trans Pacific Partnership (TPP) trade deal and pursuit of a trade conflict with China that threatens to disrupt regional supply chains.

The United States first outlined its strategy to develop the Indo-Pacific economy at an Asia-Pacific summit last year.

It used the term “Indo-Pacific,” defined by Pompeo as a region stretching from the U.S. West Coast to India’s west coast, to highlight a broader and democratic-led region in place of “Asia-Pacific,” which from some perspectives had authoritarian China too firmly at its center.

Among the new investments outlined by Pompeo, the United States will invest $25 million to expand U.S. technology exports to the region, add nearly $50 million this year to help countries produce and store energy resources and create a new assistance network to boost infrastructure development.

Pompeo said the United States has signed a $350 million investment compact with Mongolia to develop new water sources. He said the U.S government’s Millennium Challenge Corporation was also finalizing an agreement to invest hundreds of millions of dollars in transportation and other reforms in Sri Lanka.

Ray Washburne, president of the U.S. government’s Overseas Private Investment Corporation, said it hopes to double the $4 billion it currently has invested in the Indo-Pacific “in the next few years.”

“Our way of doing things is to keep the government’s role very modest, and it’s focused on helping businesses do what they do best,” Hook said.

Critics of Beijing’s Belt and Road Initiative have said it is more about spreading Chinese influence and hooking countries on massive debts. Beijing has said it is simply a development project that any country is welcome to join.