Was life for Tamils better under LTTE? 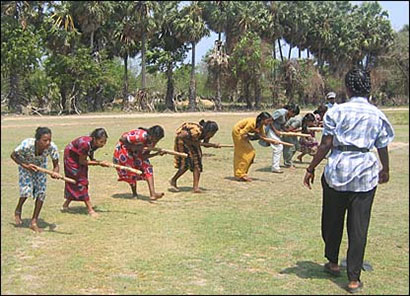 Given that separation of Sri Lanka is out of the question the Tamils had 2 choices before them. To be ruled under a defacto armed LTTE or to remain under sovereign Sri Lanka ruled by a democratically elected Government that comprised representatives of all ethnic groups. The Tamils did live under the LTTE for well over 25years and the Tamil political party the Tamil National Alliance openly declared that the LTTE was the “sole representative of the Tamils” not once but several times. In so doing the TNA lumped all the Tamils en masse into a terrorist group and stigmatized their own people. How irresponsible for a political party to equate Tamils with Terrorism. The Tamils now need to undo this damage by disassociating themselves from the TNA which continues a separatist agenda if Tamils do not share the separatist agenda of both LTTE and TNA. It is long overdue for the Tamils to now come out and say whether life was better under the LTTE, whether TNA was correct to say LTTE stood for all Tamils and how life is today different.

Why is separation of Sri Lanka to form a Tamil Eelaam out of the question?

That is so because when 72million out of the world’s 77million Tamils live in a state which has a history of attempting to secede from India on the grounds that it wishes to form a Tamil Nation and that state is named after Tamils (Tamil Nadu – land of the Tamils), where Tamil is the official language, where Tamil culture, traditions etc reign supreme – by virtue of everything being done by Tamils, for Tamils, Tamil Nadu is where Tamil Eelaam should rightfully be not in a miniscule area in Sri Lanka where none of the world’s 77million could ever think of congregating.

The whole Eelaam in Sri Lanka quest was nothing but a ploy to delay the inevitable balkanizing of Tamil Nadu from India which India schemed to perfection. The only confusion came when external forces hijacked that plan to create a grander plan which ultimately led to the assassination of Rajiv Gandhi. His death carried out by LTTE bore signs of a contract killing. India may well do to find out who exactly ordered the killing. The “new” state is like to comprise Tamil Nadu and North Sri Lanka which will end up nothing better than the Philippines which has been turned into an immoral state. It is a challenge for the Church and Christians to prove that the assumption that they supported the LTTE is wrong instead of simply calling those that pose the questions as racists, hate mongers and what not simply to avoid answering.

Who actually suffered under LTTE rule?

1. Tamils living amongst the LTTE in the Vanni (Mullaitivu, Kilinochchi)

2. Tamils living outside of LTTE “territory” in Sri Lanka

The number of Tamils living in the Vanni amongst the LTTE through the 3 decades of LTTE rule are miniscule in comparison to the Tamils who live outside of LTTE “territory” amongst Sinhalese and those now living overseas.

It is from this miniscule number that LTTE made their manpower. Some of its cadres also were taken from impoverished areas of the East too. What essentially has to be remembered is that the Tamil members that LTTE “recruited” were kidnapped and forcibly taken from impoverished low-caste Hindu or converted Hindus whose women had to supply LTTE throughout the conflict. Did LTTE kidnap its cadres from high-caste Tamil homes in Jaffna, Colombo – NO. This is an area that has not been looked into but extremely important to derive at the manner LTTE selected its cadres. If there were high-castes in the LTTE they all held senior posts and were privy to the LTTE kitty which was USD300million.

Areas of Mullaitivu and Kilinochchi never even had electricity – children never went to school and the people had lived thinking that life was all about LTTE. Today, over 60% of these areas already enjoy electricity, schools are functioning, teachers can teach and there are students to teach.

It is these miniscule number of Tamils suffering under the LTTE that now sees a brand new life where none of the rest of the Tamils cared to speak on behalf of them – ever. Did the TNA ever ask the LTTE not to kidnap these children to manufacture them into killers training them in pretentious orphanages set up in the middle of the jungles to which were visited by Father Emmanuel raising questions as to why the Church would watch one of its leaders encourage children to be turned into killers.

Deriving at exact numbers is cumbersome in view of no proper census taking place in the areas that LTTE controlled for over 2 decades. It must also be pointed out that LTTE, humanitarian organizations having close links to LTTE including religious groups gave false figures of civilian populations in view of the GOSL sending food and essential supplies to the North which was a crafty means of hijacking these essentials to be used amongst LTTE. Figures are confused in the likelihood of “illegals” coming from Tamil Nadu and now posing as Sri Lankan Tamils. These Indian “illegals” need to first be identified. Then there is the visible numbers of Tamils making their way Southwards to live amongst the Sinhalese whilst others made use of the opportunity to cry discrimination and see asylum overseas. Therefore, with Tamils being 12% of the population of a 20m total populace – Tamils can at most be 2.4million only. The estate Tamils numbering 5% are never part of any discussions proposed by TNA or the LTTE therefore they should not be included into the statistical figure simply to make Tamil representation 18%. As things stand with Tamils now living legally and illegally overseas the 12% has come down to bordering 10% if not less. The Sri Lankan Foreign missions should be asked to do a statistical figure on the legal numbers of Tamils living overseas whilst help should be sought from host nations to find out the illegal ballpark figure too.

Therefore, what needs to be clearly articulated is that the Tamils living amongst the LTTE were the real sufferers. All the other Tamils shared the same fears that the Sinhalese faced since it was the Sinhalese civilians who became the targets with every bomb and suicide attempt made. Yet, the Tamils living in Colombo and suburbs went about their employment, children attended schools and did everything that they would normally do alongside the rest of the communities but obviously sharing the same fears. There was nothing exclusive that they feared different to what the other communities feared.

The Tamils overseas however whether they were openly pro-LTTE or not had to make monthly payments to the LTTE kitty and they had to also participate in demonstrations and other events that LTTE front organizations organized. With time this arrangement bore much monetary benefit giving many positions in these front organizations, opportunities to travel overseas, rise in financial situation and moreover a chance to move around with VIPs and dictate terms to even Sri Lankan politicians. For most Tamils whether they like to admit or not there were some reasons to thank the LTTE while a handful of others were open enough to admit to LTTE atrocities but at great risk to their lives. The handful of moderates that did openly denounce the LTTE were all silenced and understandably that made any others warned into silence.

But it is a good time for us to know some hard truths. When we speak on behalf of the Tamils against the LTTE and find fault with the TNA for openly being their mouthpiece – we would like to know whether we are wrong to find fault? When we find fault with the LTTE for threatening intimidating Tamils and denying them progress socially through several decades – were we wrong to conclude so? We would frankly like to know whether our opinion of the LTTE and the TNA is the same as the Tamils or whether we are wrong to assume that the LTTE was a terrorist outfit and the TNA nothing but its mouthpiece and now taking over from where LTTE failed?

Somehow somewhere something is not right because after the victory over the LTTE as citizens of Sri Lanka we expected the Tamil community to also join us in the victory over terrorism and given the fact that the LTTE had been denying Tamils a host of human rights as well as violating Tamil human rights, we thought the rest of the Tamils living amongst the Sinhalese and those overseas would be happy that LTTE was no more and press for actions to be taken against the TNA since they were the only survivors of the separatism that linked to LTTE – we would like to know where our assumptions have been proved wrong by the Tamils themselves.

Genuine reconciliation cannot take place until these loopholes and gaps are given genuine and honest answers.

9 Responses to Was life for Tamils better under LTTE?

Home » Was life for Tamils better under LTTE?