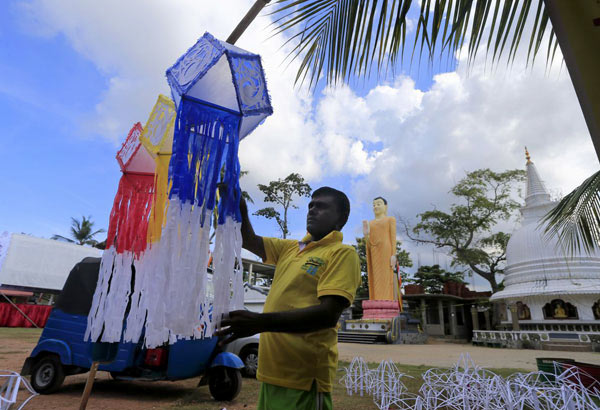 Sri Lankan authorities have removed thousands of wasps from a tea growing region ahead of a visit this week by Indian prime minister Narendra Modi.

Modi after visiting the Colombo Friday is scheduled to fly by helicopter to a tea plantation to open an Indian-funded hospital and speak to planation workers with of Indian heritage.

Two wasp nests were removed from tall trees near two helipads where Modi and Sri Lankan leaders are expected to land because of concerns the helicopters carrying them might disturb the wasps and prompt them to sting people within 2 kilometers (1.2 miles) of the site, Tissa Bandara Thambawita of the Bee Protection Organization said yesterday.

The wasps were released in a nearby jungle, he said.

Eight people from the group are posted in the area until Modi finishes his visit.

Modi arrives in Sri Lanka on Thursday as the chief guest for the Buddhist celebration of Vesak which marks the birth, enlightenment and passing away of the Buddha.

Modi will address the international conference to mark the United Nations Day of Vesak in Colombo before heading to the tea plantation. He is scheduled to leave Sri Lanka on Friday.