‘We want to beat India for Sangakkara’ – Mathews 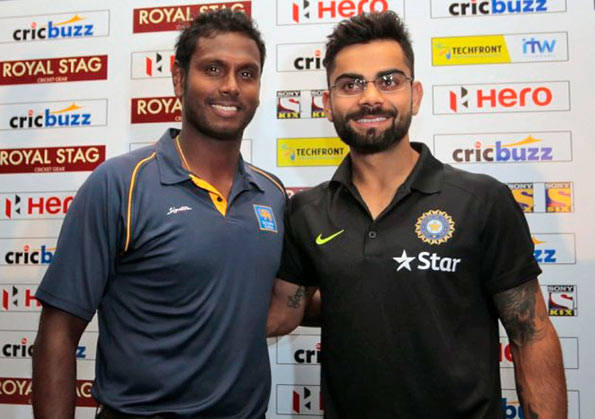 Sri Lanka captain Angelo Mathews said Wednesday his team is eager to send off the retiring Kumar Sangakkara by winning the test series against India that starts next week.

Sangakkara has announced he will retire from international cricket after the second game of the three-test series. His last match will be from Aug. 20-24 at P. Sara Oval, Colombo.

“A series win is the best way to send off a player of Sangakkara’s caliber,” Mathews said.

He said his own participation in the first test starting in Galle next Wednesday is doubtful as he has still not recovered from a wrist sprain.

Though fast bowlers Dushmantha Chameera and Suranga Lakmal will miss all three matches due to injuries, Mathews said he is confident that Sri Lanka has enough good players to win the series.

Sangakkara, who has played 132 test matches so far and scored 12,305 runs at an average of 58, is close to another landmark.

If he scores a double century, he will equal the record for the highest number of double centuries in a test career, matching Australia great Donald Bradman, who scored 12 double hundreds in only 52 tests.

India has not won a test series in Sri Lanka since 1993 under Mohammed Azharuddin. Captain Virat Kohli said his team will focus on performing well rather than worrying about records.

“We have come here to play good cricket. Both teams are in a rebuilding phase,” Kohli said.

“The number of years, series wins, records, creating history all sorts of things really go onto sidelines, because you really want to focus on playing good cricket as a team and building a strong side.”

Home » ‘We want to beat India for Sangakkara’ – Mathews