We will protect Sri Lanka in Geneva – Mahinda Samarasinghe 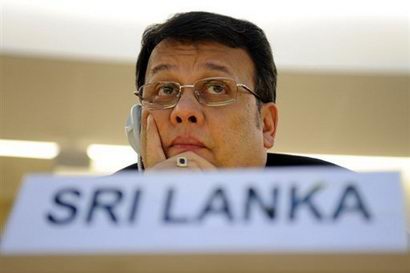 Minister of Plantation Industries and Co-Chair of the Permanent Standing Committee on Human Rights in Sri Lanka,Mahinda Samarasinghe, had reportedly said the government will face challenges at the upcoming United Nations Human Rights Council (UNHRC) sessions to be held in Geneva in March.

He stressed the government would protect and safeguard the country and the war heroes.

The government will also be armed with information gleaned from the census conducted by the Department of Census and Statistics in the Northern Province, he further said.

The United States of America is expected to present a resolution against Sri Lanka regarding its alleged violations of human rights at the sessions.

“The general comment I have made is quite self- evident,” Samarasinghe said.

Director General of Publicity and Additional Secretary of the Ministry of External Affairs, Rodney Perera, speaking to this newspaper, said: “Since last year, we have been updating all the countries about the progress made with regard to the implementation of the recommendations of the Lessons Learnt and Reconciliation Commission (LLRC), the elections that were held, and so on. This is a continuing process, and various delegations appointed by us have been responding to questions on many diverse fora. We are satisfied with the competency of our missions on foreign soil and we are not perturbed by political comments by detractors.”

Home » We will protect Sri Lanka in Geneva – Mahinda Samarasinghe