We will survive no-confidence vote – Ravi 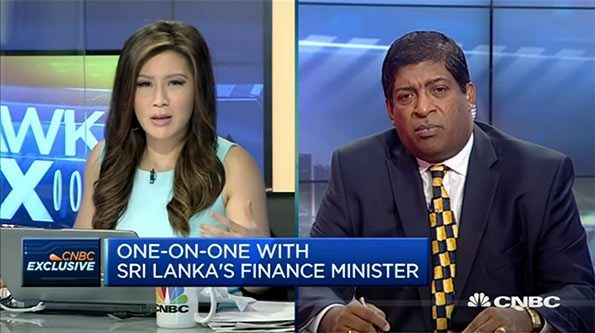 Sri Lanka’s finance minister has defended the pace of the country’s economic recovery, as a bruising vote of no confidence in the government looms.

In an exclusive interview with CNBC, Ravi Karunanayake, Minister of Finance of Sri Lanka, insisted that the no-confidence motion filed against Prime Minister Ranil Wickremesinghe would fail.

However, the political uncertainty has taken a toll on Sri Lanka’s stock index. On Tuesday, the main stock index extended losses to finish at 7,067 points – its lowest closing level since April 16. It has slumped more than 3 percent year-to-date.

Spearheaded by the country’s opposition camp over the weekend, the no-confidence vote has garnered the support of nearly half of the 225 members in the house, but the 52-year-old minister remains optimistic.

The no-confidence motion marked the latest political trouble for President Maithripala Sirisena’s government, which does not enjoy a majority in parliament.

Last month, the 63-year-old new leader, who took office in January after beating long-reigning Rajapaksa in a close presidential race, said he plans to dissolve the country’s parliament after some crucial political reforms are passed. However, the Sirisena government has yet to fix a date for the general election.

When asked whether the motion reflected the population’s dissatisfaction with the country’s slow economic recovery, the finance minister defended the governing party’s track record.

“[The motion] will not go through. This is something done by former president Mahinda Rajapaksa who lost his political control and is getting a handful of extremists in [the] parliament to make life difficult for the new president and [disrupt] this economic recovery that has been so smooth and accepted by the people,” Karunanayake told CNBC Asia’s “Squawk Box” on Tuesday.

“Considering the fact that the economy we inherited is public debt driven, corrupted and without a focus, it is the incumbent president and the prime minister who have given Sri Lanka a new lease of life,” Karunanayake said.

“We shunned away from the rest of the world and today we’re making inroads back into the world,” he added, referring to the move by the current administration to revive ties with India and the West.

Under ex-President Rajapaksa, Sri Lanka’s foreign policy tilted heavily toward China and relations with the West soured after Washington considered imposing sanctions on Colombo for refusing investigations into allegations of human rights abuses at the end of a decades-long civil conflict with Tamil separatists in 2009.

Dubbed as Southeast Asia’s fastest-growing economy, the island’s gross domestic product (GDP) came in below expectations at 7.4 percent in 2014, but economists remain optimistic about Sri Lanka’s growth in the new year. According to the United Nations Economic and Social Commission for Asia and the Pacific (ESCAP), the country can attain a growth rate of 7.5 percent in 2015 on continued strength in private consumption.

In a bid to spur growth, the central bank cut key policy rates by 50 basis points in April, CNBC reports.