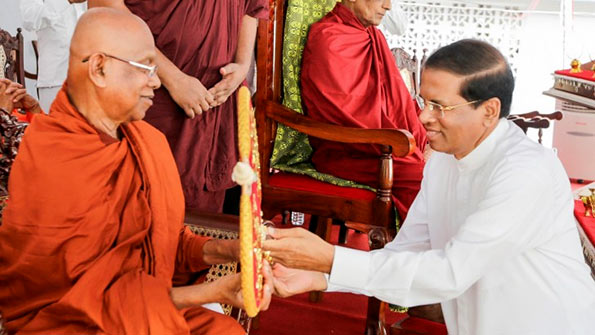 President Maithripala Sirisena says the next year will be planned as a year for implementation of well planned programmes for promotion of Buddhism.

“Dharma Prachraka programmes will be implemented from the next year under the guidance and advice of the Maha Sangha including the Tri Nikayas’ Sanga Nayaka Theros with the aim of making Sri Lanka as the Centre of Theravada Buddhism”, the President said.

He made these remarks participating in a religious ceremony held at the Ambalangoda, Polwaththa Sri Aggarama Temple on September 12.

This ceremony was organizied to offer the Sannasa (Scroll) to the Most.Ven. Nindane Vajiragnana Nayaka Thero for elevating his position to Anu Nayaka Thero of the Kalyaniwansa Nikaya of the Amarapura Maha Nikaya.

The President presented the Sannasa (Scroll) and the Vijinipatha to the newly appointed Anu Nayaka Thero.

Addressing the religious ceremony, the President further said that the service of the educated, disciplined and erudite Bhikkhus is an imperative requirement of the country.

President Sirisena pointed out the only way to heal the deteriorating society day by day with commercialization is the Buddhist philosophy and further said that the International Vesak Day celebrations will be held in grand scale in the next year and all the Head of States of the Buddhist countries will be invited to attend this ceremony.

The Maha Sangha including, the chief prelate of the Sri Kalyanawansa Chapter Most Venerable Dodampahala Chandrasiri Nayaka Thera, State Minister, Lakshman Yapa Abeywardena, Governor of the Southern Province, Hemakumara Nanayakkara, Chief Minister, Shan Vijayalal De Silva, Ministers and MPs and many devotees of the area participated in this event