What the public did not know about VAT 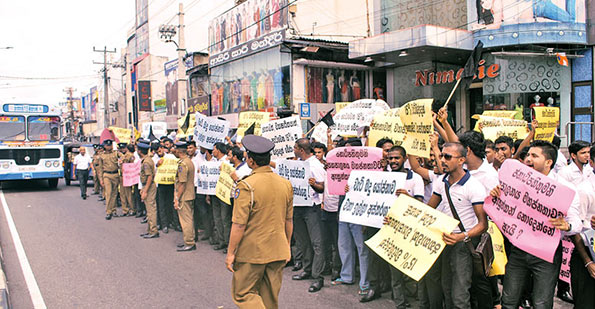 The ‘National Unity’ government of President Maithripala Sirisena and Prime Minister Ranil Wickremesinghe is finding out the hard way that governing in a coalition of the two major political parties, the United National Party (UNP) and the Sri Lanka Freedom Party (SLFP), is no walk in the park.

It is only a couple of weeks since it averted a major crisis over the appointment of a Governor to the Central Bank. Prime Minister Wickremesinghe was keen to retain the services of Arjuna Mahendran and President Sirisena wanted to have a different person in charge of the country’s premier financial institution.

Eventually, the matter was resolved in a suitable compromise with the appointment of Indrajit Coomaraswamy to the post. Coomaraswamy is eminently qualified and held in high esteem in financial circles both as a professional and as an individual and can be expected to act without political bias.

Then, just when the government thought that everything was hunky dory in the UNP-SLFP coalition, another issue is looming: disagreement over the increase of the Value Added Tax (VAT). It is an issue that highlights some of the shortcomings of the government, which it could have done without.

To begin with, the changes to the VAT were only an increase from the existing eleven per cent to fifteen per cent, a hike of four per cent. However, the ‘Joint Opposition’ (JO) headed by the Mahinda Rajapaksa faction of the SLFP engaged in a vigorous campaign, exploiting the current economic hardships felt by many to cleverly portray the VAT as almost a new tax.

As a result, the general public’s perception is that the VAT is a ‘new’ tax imposed by this government which has resulted in the escalation of prices of all consumer goods when, in reality, it was a tax that was also levied by the previous government, albeit at a slightly lower rate.

There are many government ministers talking to the media almost on a daily basis but the message that the VAT was an old tax and that what is being contemplated was a four per cent hike never got through to the masses. The government can claim that the opposition was scare mongering, but then, that is what oppositions are supposed to do!

If that was not bad enough, the government got it wrong again when it imposed the increased rate of the VAT from May 2, apparently without the relevant legislation being passed in Parliament. This was challenged in the Supreme Court by five persons led by the indefatigable Wimal Weerawansa, leader of the National Freedom Front (NFF).

The Supreme Court issued an interim order suspending the operation of the decision to impose not only the VAT but also the Nation Building Tax (NBT) from May 2. A three judge bench comprising Chief Justice K. Sripavan, Justice Buwaneka Aluvihare and Justice Prasanna Jayawardena observed that the Interim Order would be effective until the final determination of the petition or suitable amendments pertaining to the tax increase are passed in Parliament in due course.

The Prime Minister’s office responded quickly to this. It released a statement just hours after the verdict assuring that the legislation enabling the changes to the taxes, which had already been tabled in Parliament, would be passed expeditiously. It had been proposed to pass the legislation yesterday (July 20) but now the issue has taken another trajectory.

That is after SLFP members of the government suggested that the VAT in its present form could be detrimental to the government’s popularity. They were particularly feeling the heat in their electorates where JO stalwarts were drumming up support against the VAT. With Local Government elections also on the cards, they felt it would be politically suicidal to push through with the increased VAT and urged President Sirisena to intervene.

President Sirisena shared some of these concerns. He had already commented publicly on the tax hikes stating that he would not allow increased burdens on the public. Having received representations from his ministers and parliamentarians, he was also of the view that the blow dealt by the increased rate of the VAT should be somewhat softened. Perhaps in such an attempt to ‘soften the blow’ the government, through a gazette notification issued by the Ministry of Industry and Commerce, announced price control on sixteen ‘essential’ items.

In the meantime, some SLFP ministers were voicing their concerns in public. Fisheries and Aquatic Resources Minister Mahinda Amaraweera, who is also General Secretary of the United Peoples’ Freedom Alliance (UPFA), acknowledged that the VAT was causing panic among the public and hinted that SLFP members would not be supporting the imposition of the VAT in its present form.

These proposals were due to be handed over to the President on Tuesday. At the time of writing, there were indications that the SLFP committee had recommended that the imposition of the new taxes be deferred until March 2017. This would not be in keeping with the original plans of the Treasury, cash-strapped as it is now.

The SLFP committee has suggested that the party should not support the imposition of the tax prior to that and if indeed, President Sirisena accepts that recommendation the tussle over the VAT is likely to drag on for a few months more. That is because, without the SLFP’s support, the UNP faction of the government alone does not command the numbers to push the legislation through Parliament.

The March 2017 timeframe has obviously come in to play with an eye on local government elections. If polls are held in the current political environment, it is no secret that the SLFP vote will be split between the Sirisena and Rajapaksa factions of the party.

The Rajapaksa faction feels it has the edge, despite being out of power because it commands the support of fifty one parliamentarians which constitute a majority of the ninety five seats won by the UPFA at the August 2015 general elections. It feels that its support at the grassroots level would translate to victory over the Sirisena faction- if not the UNP- at a Local Government election.

However, if traditional voting patterns hold and the base votes of the SLFP and the UNP remain approximately the same, any division in the SLFP can only result in one outcome: a victory for the UNP. This is why SLFP parliamentarians in the Sirisena faction are more perturbed by measures such as the VAT, than their counterparts in the UNP.

In hindsight, the government, both the UNP and SLFP arms of it, could have handled the VAT issue much better. It could have ‘marketed’ the VAT as a tax that was in place and levied by the previous government and informed the public that it was only increasing it by four percentage points, instead of making it seem as if it was a brand new tax.

It could also have got the legislative procedures in place and passed them in Parliament, before public opinion against the tax was mobilised by the Joint Opposition which led to SLFP parliamentarians running for cover. Now, the government has to take all the flak for the VAT- but does not even have the tax revenue to bolster its coffers.

It could be argued that the democracy is a many splendoured thing and that inclusion of the two major parties in government has resulted in a natural system of checks and balances. Had the VAT been imposed, even the UNP would have become unpopular and that therefore it is a blessing in disguise for the UNP that the SLFP is backtracking on it.

Whether that is so is left to be seen. As the government grapples with the task of raising much needed revenue to balance its books, we can be certain that the VAT saga will continue to irk the government for many months to come.

2 Responses to What the public did not know about VAT

Home » What the public did not know about VAT