Whatever Sri Lanka’s election result, China’s back in business 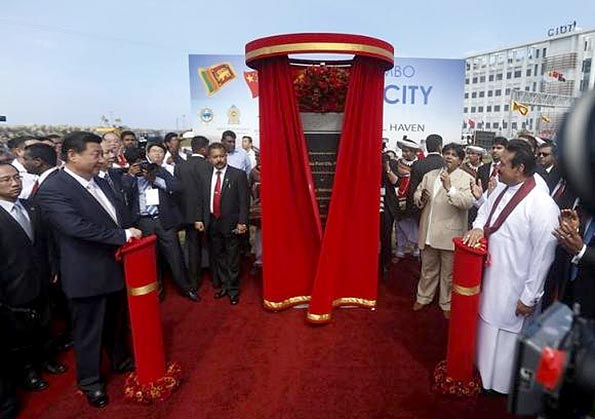 Work on a landmark Chinese-backed waterfront development in Colombo could resume after next Monday’s general election in Sri Lanka, even if Beijing’s preferred candidate for prime minister, ex-President Mahinda Rajapaksa, is defeated.

Eight months after losing power, the 69-year-old strongman is mounting a comeback bid. But his campaign – dogged by allegations of corruption and abuse of power that he denies – is flagging.

The reformist alliance that rallied to elect President Maithripala Sirisena in January remains intact. Pundits say it should secure a majority and can call on the backing of smaller parties if needed.

Although avowedly pro-Western in his outlook, Prime Minister Ranil Wickremesinghe is not about to slam the door on China. Beijing has already pumped billions of dollars into Sri Lanka to build a staging post on its “Maritime Silk Route” to the oil-rich Middle East and on to Europe, its largest export market.

“We want to be a non-aligned investment attraction,” Finance Minister Ravi Karunanayake told Reuters in an interview.

Asked what that meant, he joked: “Taking from everybody.”

Talks are under way to amend the terms of the $1.4 billion ‘port city’ project in Colombo. Work on it was halted soon after Sirisena took power as his government investigated whether the Rajapaksa-era deal broke rules and involved corrupt payments.

A compromise that rules out direct Chinese land ownership for the real estate development could help forge an understanding on other projects put on hold this year, he said.

Currently, the port city remains a pile of boulders strewn along the fenced-off shoreline by Colombo’s commercial seaport.

But cranes are still working on the Shangri-La hotel, part of Hong Kong-listed Shangri-La Asia Ltd, just along the coastal strip. Construction of the Chinese-funded Lotus Tower, destined to be South Asia’s tallest building, continues.

Locals joke the tower would be the ideal vantage point to mount a surveillance operation from the commercial capital of a nation that, the West had feared, was sliding inexorably into Beijing’s arms.

While China denies building a listening post, one Western diplomat said that some Chinese-built infrastructure in Sri Lanka has been designed for ‘dual use’ – meaning it could serve both military and civilian purposes.

Wary of Sri Lanka slipping from its grasp, Beijing now wants to strengthen its hold over the Maldives, an Indian Ocean atoll whose troubled politics belies its tourist appeal.

“Plan B is the Maldives,” the Western diplomat said. “They understand that Mahinda Rajapaksa is probably not coming back and they won’t have this kind of super-exclusivity in Sri Lanka.”

China’s strategy of building a “string of pearls” along its vital Indian Ocean shipping route has also caused anxiety in New Delhi that India – with a population soon to overtake China’s but an economy only a fifth the size – is being encircled.

Tensions between Sirisena and Rajapaksa – who despite their rivalry belong to the same political party – could block the ex-president’s path to the prime minister’s office even if he does triumph in the election.

And, in the unlikely event that Rajapaksa does lead the next government, an uneasy cohabitation between the two would rule out a return to Chinese tutelage, said former Indian diplomat Sukh Deo Muni.

“It cannot be business as usual for the Chinese,” said Muni, now a distinguished fellow at the Institute for Defence Studies & Analyses in New Delhi. “If this competition continues you would have two centers of power in Sri Lanka’s foreign policy.”

“For Washington, any scenario with Rajapaksa back in power – even merely as an MP – is undesirable,” said Michael Kugelman, a senior program associate at the Wilson Center in Washington.

China has, for its part, found dealing with post-Rajapaksa Sri Lanka to be less of a challenge than first feared.

“They haven’t completely clamped down on China’s influence in Sri Lanka, in particular in terms of economic investment,”

said Han Hua, an India expert with the School of International Studies at Peking University.

“China will certainly take a lesson away from the Sri Lanka election, including how to ensure that China’s investment and economic cooperation projects are not subject to political influence,” she added.

Home » Whatever Sri Lanka’s election result, China’s back in business