Who are the extremists in Sri Lanka? – Reply to Rajiva Wijesinha 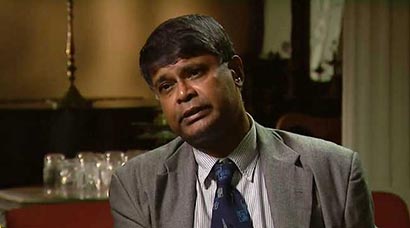 ” This is sad because, given our location, as well as the pluralism of our society, we are in a unique position to act as a catalyst in bringing other countries together. Unfortunately we have extremists in Sri Lanka who think of the country as being a Buddhist state and believe that this will justify a special relationship with China, as opposed to India which is denigrated as Hindu.There is similar disregard for the Islamic countries which supported us so strongly in our struggle against terrorist, as did the Muslims in Sri Lanka; and attacks on Christians, who are seen as surrogates for the West which is persecuting us, with no regard for the solid support of the Catholic community in general in our struggle against terrorism, and the brave stand against the Tigers of the priests who first led people out when they were being kept as hostages”

The logic in the above excerpt is difficult to comprehend. The statement itself is debatable on the ground realities of what is being projected. If  Dr. Rajiv Wijesinha, M.P.  finds it acceptable to refer to nations as Islamic  – wherein it represents only a mono-ethnic and mono-religion (which stand in the way of his prescription of bringing countries together) what is the problem when Sri Lanka is referred to as a Buddhist nation and being one that has respected and granted far more freedoms to minority religions than any other country in the world inspite of having a clear majority ethnic race with one ethnic religion?

Freedoms enjoyed by minorities can be easily proved. Anyone going from Colombo to Negombo or from Colombo to South or Central plains will visibly see that all the newest religious sites built or are being built are either churches or mosques – all along the main Galle Road – these are by any means no small constructions. Contrary to what is being promoted by Christian or Islamic owned / influenced media, none of the established churches/mosques have been attacked. The contentious areas have all been illegal constructions attempted to be shown as approved sites in order to project themselves as victim to enable the promoters  to continue developing the site despite the knowledge of its illegality. Quite a number of such ‘victim’ scenarios have been deliberately created to enable the authorization of what clearly is an illegal construction purposely intended to provoke and incur upon the Buddhist ethos and space. This ‘illegality’ has always been promoted by the fact that Islamic or Christian nations have supported Sri Lanka against terrorism and therefore ‘illegal’ constructions should be allowed. This has been the logic used at all times.

What always escapes the attention of all those making arguments against the Buddhists is to what extent the Buddhists have been supported to protect a religion and race coming down through a civilizationally proved history? There is little that anyone can deny that Tamils had been supported right throughout by the Church and all of the Church-nominated agencies, organizations and even Governments. Now with the new issue of Islamic incursions it is the Islamic states and the Wahhabi funds that have made victims even of the Muslims who are caught between living as they had done peacefully or following an Arabic culture that the sponsors have newly enforced upon them – thus the change in the dress, the behaviors and actions. None of these sharply differentiating modes of conduct existed decades or centuries ago.

Creating a non-Buddhist nation out of Sri Lanka

The forces that continue to claim Sri Lanka is not a Buddhist nation are those that are working towards creating a non-Buddhist nation out of Sri Lanka. The competition is obviously between the Abrahamic religions of Christianity and Islam. It is only the handful of Christians in the West who have understood the wrongs and injustice taking place that have totally given up their faith or become Atheists or Agnostics totally denouncing their birth religions. Incidentally the numbers of Christians leaving their faith in the West is seeing a dramatic rise which is why there is an overdrive to increase the numbers from Asia.

If multiculturalism, liberal and secular societies is the way to go and the prescription for all nations to follow why is it exempted from the Islamic nations? Why are only majority Islamic nations allowed to be called and treated as ‘Islamic’ and can continue to be Islamic but neither Buddhist and Hindu majority states are allowed to continue to use their religious identity to be affiliated with the nations they are a majority of given their historical backing, without being subject to unfair criticism?  Sri Lanka and India are just two examples of this unfair logic.

Status of Buddhism in the Middle East

Muslims can demand more rights than the non-Muslim countries they live in are willing to give despite the total lack of reciprocity on the part of a vast number of Islamic countries particularly in West Asia (middle east) to give even a basic recognition to Buddhism as a global religion and the right of Buddhists in these countries to engage in a minimum level of Buddhist practice and worship.

How fair is it to denounce the Buddhists as Dr. Rajiva Wijesinha and a similar coterie of others continuously do using the VIP platform from the position they hold, when they take up the deaths of only Tamils at every international and local forum they attend, totally ignoring to mention a word about the Sinhalese killed. Not a word gets said about the Sinhala Buddhists killed in protecting their nation against the Christian West during the colonial period, the Sinhalese villagers, leaders and civilians killed throughout LTTE terror, even a word of praise to the soldiers who sacrificed their lives to save the nation.

How fair has it been to have Christian and Islamic world only speaking on behalf of the minorities when they have totally ignored that Tamils number 75million (taking the Tamil Nadu population from where the Sri Lankan Tamils arrived) against just 14.8million Sinhala Buddhists living only in Sri Lanka? Is it not the existence of this 14.8million Sinhalese Buddhists that those realizing the dangers before them are trying to protect – is it to protect a race and religion from looming dangers given similar tragic incidents in history, religious extremism? In reality is it not the Sinhalese Buddhists who are the MINORITY against these statistical truths?

To wear the garland of tolerance and make everyone except the Buddhists happy – does it mean that the Buddhists have to simply approve and watch in silence whatever the Christians and Islamists plan and desire to do to Sri Lanka and the future of Buddhism in this country?

For Buddhists to be given the certificate of tolerance does it mean that the Buddhists should allow animals to be sacrificed and blood of these animals to flow across the roads, for cattle that was protected by both Buddhists and Hindus in gratitude for services rendered by these animals to humanity, to be allowed to be slain at every festival, to allow Churches and Mosques to come up anywhere and everywhere (legally or illegally) and even slowly take over the Buddhist temples because little by little the Buddhists and Hindus are being converted and even the Government should not take action because Islamic and Christian countries dole out funds? Is foreign funds given to the State of Sri Lanka meant to gradually and subtly usurp the place of Buddhists and Buddhism in Sri Lanka and hand the country over to either of the Abrahamic religions competing to take over the country?

For Buddhists to be finally accepted as tolerant do we have to forget our heritage, our ancestors, our national heroes who defended this country from our enemies from the colonial Christian West, forget our history and culture and religion and simply allow it to be erased from history like the Maldivians erased the Buddhist history in Maldives? Is this the new value system being promoted under the charter of secularism and multiculturalism?

For Buddhists to be declared tolerant and not extremist would it satisfy that we do not object to the Constitution being changed and the foremost place given to Buddhism in line with its historical status lasting for more than 2000 years, to be removed because all those promoting these in their official capacities are those belonging to the Abrahamic religions using their office to fastforward their objective?

Is this the tolerance that is expected of the Buddhists such that they would cease being referred to as extremists – Dr. Rajiva Wijesinha?

Would all these make non-Buddhists happy with us Buddhists if we look the other side in silence when the incursions to subvert Buddhism and its traditional status in the country, are taking place all around us?

2 Responses to Who are the extremists in Sri Lanka? – Reply to Rajiva Wijesinha

Home » Who are the extremists in Sri Lanka? – Reply to Rajiva Wijesinha