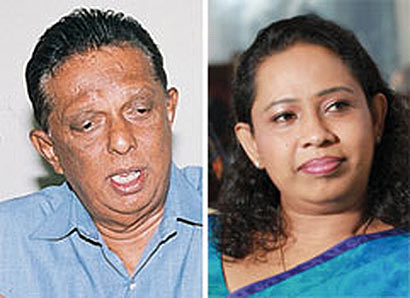 Chief Opposition Whip and Gampaha District UNP Parliamentarian John Amaratunga demanded to know why Power and Energy Minister Pavithradevi Wanniarachchi continues to keep silent on the electricity price hike, which had hit all consumers below the belt.

“She, as the subject minister, must tell the nation why such a price hike – which is of unprecedented proportions – had been effected. It funny that Media and Information Minister Keheliya Rambukwella is trying to give answers in a bid to mitigate the sufferings,” the Chief Opposition Whip told The Island.

“It seems that Pavithra had gone into hiding. We want to know the reasons for this silence. Is it because she knows nothing of the subject of power and energy coming under her purview or has Minister Rambukwella been appointed her spokesman,” the senior UNPer asked. (Courtesy: The Island)

4 Responses to Why is Minister Pavithra hiding? asks UNP