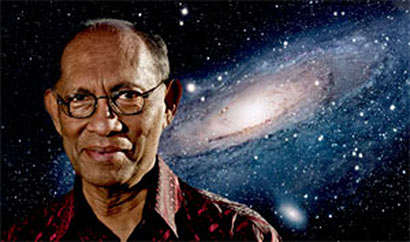 KOCHI: Thirty-years ago when Sri Lankan astrobiologist Chandra Wickramasinghe suggested that human life started from outside earth, it was greeted by waves of criticism. In fact, his findings were published amidst a lot of criticism, but Wickramasinghe continued to work on his theory that the first ‘seeds of life’ were deposited on earth from space four billion years ago.

Now his years of effort has found credence with another group of astrophysicists from John Hopkins University coming out with fresh evidence that comets dust contains water and carbon compounds.

”So life on earth has an extraterrestrial (ET) connection.”

”This was something Fred Hoyle and myself presented in our work several decades ago. We have faced severe criticism simply because there is a strong resistance among major institutions and well-known journals to not publish anything that does not support the origin of life on earth theory,” said Wickramasinghe, an astrobiologist and director of the Buckingham Centre for Astrobiology (BCAB), University of Buckingham, UK.

”The cosmic origin of life was reiterated when NASA astrobiologist Dr Richard Hoover also submitted that he found microscopic fossils in not one but three asteroid fragments that are among the oldest in the solar system.”

However, when Hoover’s paper was not accepted by several major journals, Wickramasinghe, who authors an online journal of cosmology published it with peer reviews by several people. ”Hoover who works at the NASA’s Marshall Space Flight Centre, had concluded that these microbes were remains of life that existed in deep space on the cosmic bodies that produced the meteorites in the first place.”

Wickramasinghe says that Cusat’s physicist Godfrey Louis who has been doing work on the red rain is also being ignored by the scientific community. ”Since they are unable to explain why the red rain cells are multiplying in high temperatures despite not having DNA, scientists are just keeping quiet. However, no top journals are willing to get it peer reviewed,” he said.

”The west has cultural and social problems in accepting the cosmic life origin, but India should not have a problem accepting that theory as culturally it has been comfortable with cosmic and planetary links with earth,” he opined.

ISRO had a balloon experiment collecting microbial samples from stratosphere which had revealed new forms of bacteria. ”But they have discontinued it. However, they should continue to expand that work which will bring in fresh data,” Wickramasinghe said.

Wickramasinghe, who is on a two-day visit to Kochi, had an interaction with the officials and students of Cochin University of Science and Technology (Cusat) and hopes that more Indians will venture into space research in biology and chemistry, apart from astrophysics. (Times of India)